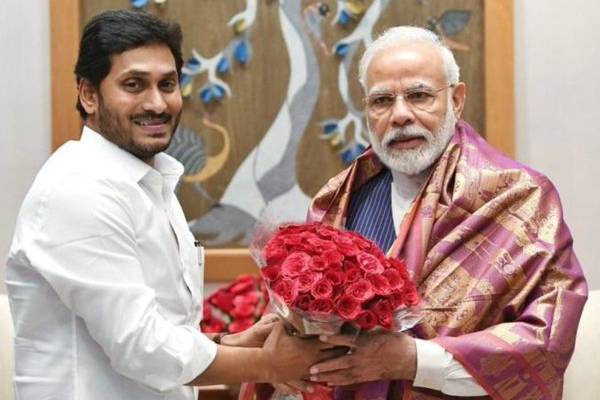 The chief minister, who had a 40-minute meeting with Modi in New Delhi, explained to him the reasons for his government’s decision to go in for three capital cities for AP – executive capital at Visakhapatnam, judicial capital at Kurnool and legislative capital at Amaravati.

It is learnt that the Chief Minister also discussed with the PM the current political situation in Andhra Pradesh. He appealed to Modi for an early release of central funds that are due to the state. Jagan sought the pending 14th Finance Commission grants for local bodies amounting to Rs 2,253 crore, GST compensation dues of Rs 3,622 crore, Polavaram dues of Rs 4,006 crore among others.

Sources said Jagan also appealed to the PM to order a CBI probe into the alleged Amaravati land and Fibernet scandals. The Chief Minister discussed the PM about various pending projects and sought the central government’s support in execution of the projects. Most importantly, the CM sought special status to Andhra Pradesh and apprised Modi on the three capitals issue, the shifting of capital from Amaravati to Vizag.

Jagan’s meeting with Modi comes at a time when the three farm bills introduced in Parliament have become a friction point between the BJP and its allies in the National Democratic Alliance (NDA). The three farm bills have triggered massive protests by farmers across the country. SAD leader Harsimrat Kaur Badal has resigned from the Modi cabinet over farm bills. BJP’s allies LJP and JDU in Bihar are at war of words ahead of polls creating fissures in the NDA. Jagan’s meeting with Modi triggered speculations that the BJP might invite the YSRCP to join the NDA.