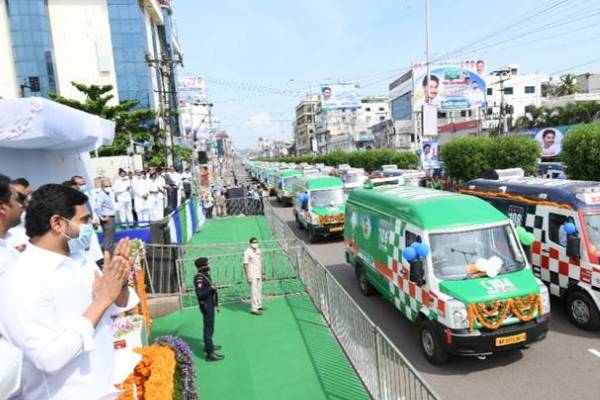 Congress senior leader and Karnataka former Chief Minister Siddaramaiah has heaped praise on AP CM Jaganmohan Reddy for launching over a thousand ambulances at one time in AP. Siddaramaiah lauded Jagan just to criticise the BJP Government in his state. From the beginning, the government ambulance services were given a priority in AP. Now, Jagan has given lots of publicity to these services and strengthening them further in order to cherish his father YSR’s pet programme forever.

However, Siddaramaiah says that while accidents’ victims were getting prompt support in AP thanks to ambulances, such victims were dying in Karnataka state due to lack of such services. He asked whether the Karnataka Government would at least wake up after seeing Jagan drive and begin efforts to rescue victims of accidents.
Siddaramaiah’s praise came as a big embarrassment for the Congress leaders in AP now. It is a well known fact that the Congress was reduced to a zero in AP because of Jaganmohan Reddy. One particular community shifted their loyalties en masse from Congress to YCP. Consequently, the Congress has lost deposits and could not win a single MLA seat successively in 2014 and 2019 elections. Jagan Reddy is solely responsible for single-handedly crushing the Congress. How can Siddaramaiah praise Jagan?

After this, AP Congress leaders have launched efforts to do damage control by explaining about the AP politics to Karnataka leadership.