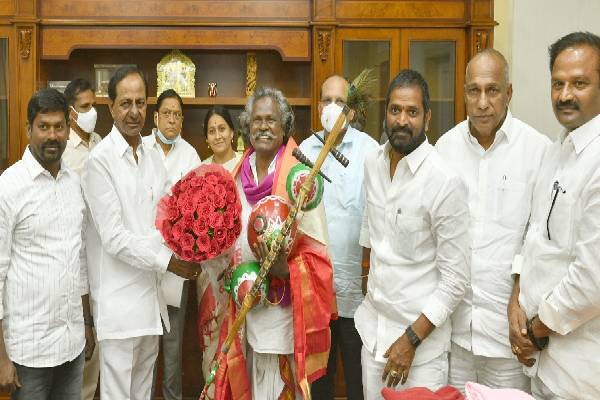 Mogilaiah was recently conferred with “Padma Shri” Award by the Central government on the occasion of 73rd Republic Day.

KCR praised Mogilaiah on winning Padma Shri Award and for bringing laurels and recognition to Telangana and Telangana’s art and culture.

The amount will be used to construct a decent house for Mogilaiah who now lives in a shed-like house in a slum area in Hyderabad.

The Telangana government will also pay him monthly pension every month.

Mogilaiah and his family members are facing severe poverty and financial problems for the past several decades. All his woes are now coming to an end after winning Padma Shri award.

Although Pawan Kalyan and few other celebrities, NGOs donated money to Mogilaiah after he became popular with Bheemla Nayak title song, the KCR’s huge cash reward and a plot will change the life of Mogilaiah and his family forever.