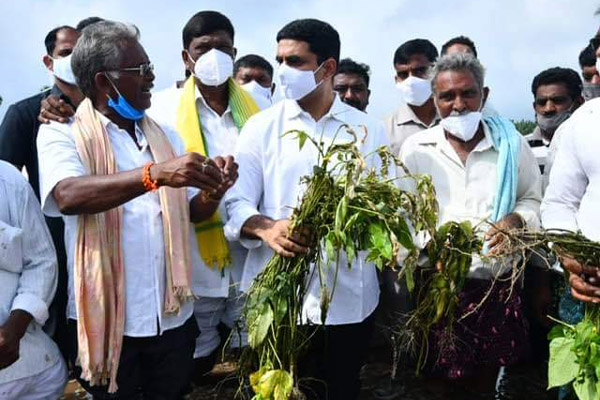 TDP national general secretary Nara Lokesh on Friday came down heavily on the Jagan Mohan Reddy-led YSRCP government for failing to come to the rescue of farmers in Anantapur.

On Friday, Lokesh visited the flood-hit villages in Anantapur district and interacted with farmers at Karidikonda and Peddavadugur villages. The TDP general secretary enquired about the extent of damage to crops, mainly cotton and groundnut.

Speaking to the media, Lokesh slammed the Jagan government for its lackluster approach in providing financial assistance to the flood affected farmers in Anantapur. He alleged that the YSRC government which claims to be ‘Rythu Bharosa’ government, had neglected the welfare of farmers.

Lokesh was accompanied by former minister Kalva Srinivasulu, ex-MLA J C Prabhakar Reddy, and other TDP leaders. Lokesh demanded the state government to immediately pay Rs 27,000 compensation to farmers. “The government has failed to provide any subsidy to the farmers in the last 17 months. The YSRCP has not implemented a single promise made in its manifesto. This is a farmer unfriendly government,” he criticized.

More than 48 mandals in Anantapur received heavy rains and floods, mainly affecting cotton, groundnut, paddy and other cash crops. Groundnut farmers in Anantapur expected a bumper crop this Kharif, but suffered heavy losses due to the flash floods. The loss of groundnut crop was more in Anantapur district than other districts.