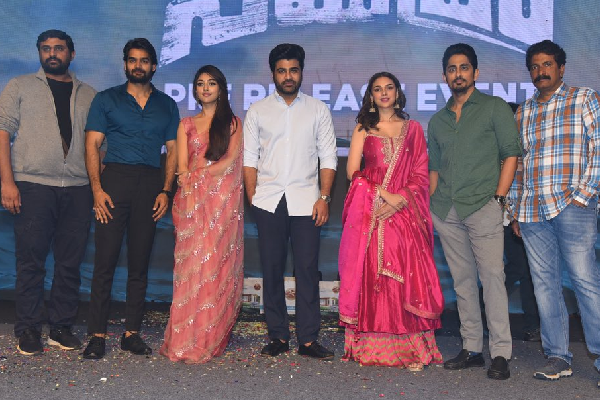 The suspense over Maha character in Maha Samudram is ended. Pre-release event of Ajay Bhupathi directorial happened last night and both Sharwanand and Siddharth revealed who Maha in the film is.

Before that, the makers released release trailer which is more thrilling and intense than the theatrical trailer. Ajay Bhupathi thanked Sharwanand and Siddharth for all their support. “Maha Samudram happened only because of them. They simply listened to my instructions. I’m confidently say that Maha Samudram will become a huge blockbuster.”

Hero Siddharth says Maha Samudram is not his comeback film, but it’s his relaunch in Telugu. He said Sharwa is the only hero of the film. “Sharwa, I love you. Maha Samudram gave me a close friend like Sharwa.”

Sharwanand said script is actualy the hero of the film. “Maha is the main character of the film, as story revolves around it. Aditi played the role exceptionally well. The character has lots of depth.”

Sharwa further said all his films released for Sankranthi or Dussehra festivals turned out to be super hits. “Maha Samudram releasing for Dussehra will become another blockbuster in my career.”