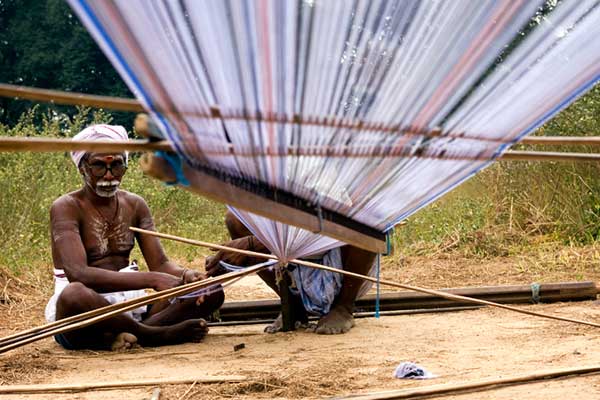 Andhra Pradesh government today extended the debt waiver scheme to weavers of the state. The implementation of this long pending assurance given to the weavers of the state coincided with the launching of Jana Chaitanya Yatra by chief minister from today. The program is meant to create awareness among the people about the implementation of poll promises and get feedback from the people. Weavers are strong force community based vote bank after the farmers.

The Scheme for Waiver of Loans to Handloom and Powerloom Sector, meant to to redeem weavers from the debt, is based on the recommendations of the Expert Committee headed by P.Kotaiah, , former Chairman, NABARD. The expert committee, which studied the debt problem of the weavers from handloom and powerloom sectors, suggested modalities and methodologies of implementation of debt waiver scheme in the report it submitted to the government on June 2014. The waiver is expected to put a financial burden of Rs 110.96 crore.

As in the case of farmers, the loan waives is applicable to loans taken on or before 31.03.2014.The guidelines for the implementation of the scheme are :

(ii) Weavers Group Loans; up to Rs.5,00,000/-( Rupees Five Lakhs only), subject to condition that within the weavers groups the eligibility for waiver of the loan outstanding per individual will be limited to Rs.1,00,000/- (Rupees One Lakh) only, and;

(iii) up to Rs.1,00,000/-( Rupees One Lakh only) loans to Powerloom units which have below 5 HP Power connection and availing 50% power subsidy scheme.

The Commissioner, Handlooms and Textiles, has been asked to furnish operational guidelines to implement the “Scheme for Waiver of Loans to Handloom and Powerloom Sector” immediately.