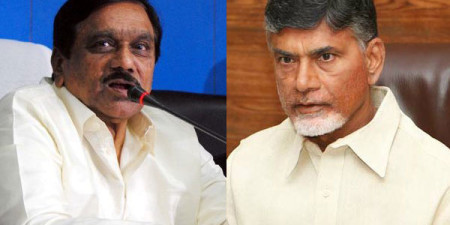 Taking the cold war to a new height, chief minister Chadrababu Naidu took a dig at the deputy chief minister K E Krishnamurthy, who was sitting by his side on stage of collectors conference, by referring to corruption in revenue department.

It is well known that the corruption in the Revenue department has become bone of contention for the differences between the chief minister and deputy chief minister, who is also the revenue minister. Just 48 hors ago, having received complaints of large scale irregularities, chief minister Naidu vetoed 23 transfers of deputy collector effected at the instance of KE Krishnamurthy. It was second time that Revenue ministers faced the disapprobation of chief minister in the matter of transfers.

The CM wondered at double digit growth in corruption instead of development in revenue department. He said it will not be entertained any longer and said reforms are in place to change the public perception of the department. “Like never before all the land records are being digitised and “Mee Intiki Mee Bhoomi” initiative has been taken up to correct the mistakes in the records. Questioning the rationale in issuing dozens of certificates from revenue department Naidu stressed on the need for simplifying the procedures.