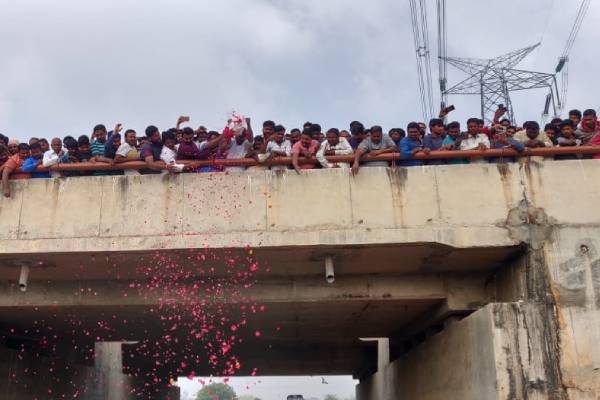 After the ‘encounter’ killing of the four accused in the horrific Hyderabad gang rape and murder case, reactions from political corridors are pouring in, mostly hailing the police’s action.

Veteran leader and National Vice-President of BJP Uma Bharti took to Twitter to express her sentiments on the incident.

In a series of tweets, she hailed Telangana police for quick action.

“This is the biggest incident in the 19th year of this century that guarantees women safety. All police officials, who have done this deserve respect. It will develop a sense of security in women in other states of the country…Jai (salute) Telangana police.”

Former Madhya Pradesh Chief Minister Shivraj Singh Chauhan said, “The whole country is relieved by this encounter. They have been punished for what they did. Justice has been delivered. I can imagine how painful it would have been for that daughter who was brutally raped first and then burnt alive.”

Commenting on the lengthy legal process he said, “We made a provision for capital punishment in such matters but no culprit has been hanged till date due to long legal procedures of lower courts, high courts, Supreme Court, and mercy petitions. Justice delayed is justice denied.”

Shiromani Akali Dal leader leader Manjinder Singh Sirsa said “On the behalf of every daughter and father of this country I want to thank Hyderabad police for their action in Hyderabad rape and murder case of the doctor. Such culprits should be handed over to people for quick justice. I would also request the courts not to grant bail in such crimes because it is not a bail, it is certificate for them to commit such a crime again.”

A week after the brutal gang rape and murder of a young woman veterinarian in Hyderabad, police shot dead all the four accused in an alleged ‘encounter’ near Shadnagar town early on Friday.