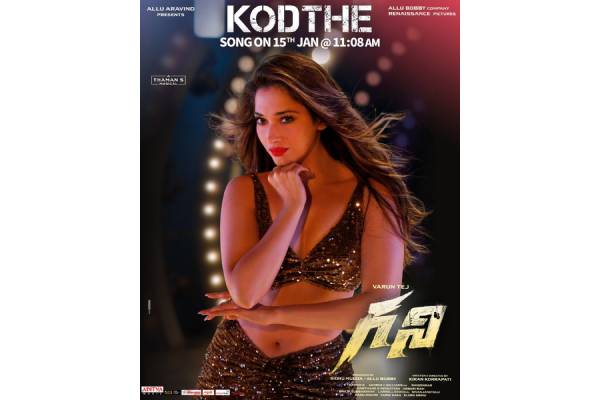 Mega Prince Varun Tej will be playing a boxer in his next film Ghani which is announced for March 18th release. Milky beauty Tamannaah will be seen shaking her leg with Varun Tej in a special song ‘Kodthe’ and the song will be out on January 15th. The makers made an announcement with a poster that has Tamannaah in a sizzling pose. The post-production work of Ghani is happening at a fast pace. Kiran Korrapati is making his directorial debut with this boxing drama.

Saiee Manjrekar is the leading lady and Upendra, Suniel Shetty, Nadiya and Jagapathi Babu will be seen in other important roles. Thaman is the music director of Ghani. Allu Bobby and Sidhu Mudha are the producers. Ghani is carrying good expectations and the film fetched record prices through the deals. Allu Aravind is overlooking the film’s business and he is presenting Ghani. Varun Tej transformed himself for Ghani. The actor is also shooting for F3 along with Venkatesh and the film is announced for summer 2022 release.