The teaser of macho hero Gopichand’a Pakka Commercial was unveiled a little while ago and it indicates that the title is very much in accordance with the film’s theme.

Maruthi seems to have come up with a proper action entertainer this time around, as the teaser suggests. It gets off to an action-oriented start as we see a couple of high-octane action blocks. Then comes Gopichand’s dialogue “Viallainism chesi… choosi vachanu”.

Raashi Khanna, the female lead in the film is also seen in the poster and she seems to have bagged another witty role. We also see Satyaraj in the teaser.

Pakka Commercial is directed by Maruthi and the film will be out in theatres very soon. GA2 Pictures and UV Creations are bankrolling the film. 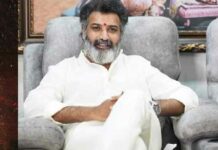