Kaira Advani, though started her career 6 years back, has become a tough competition for top actresses of Bollywood! The beauty does different roles from cool and innocent to bold, thus impressing all kind of audience.

Also, the actress made her debut in Tollywood 3 years ago with Superstar Mahesh Babu’s film Bharat Ane Nenu. With her innocent character, she made everyone fall for her. And then she appeared in a crazy role in the film ‘Vinaya Vidheya Rama’ in which Ram Charan played the lead. She recently has completed the shoot for Shershaah and is working for Bhool Bhulaiyaa 2 and Jug Jugg Jeeyo.

Speaking about her social life, she shares her pics on Instagram often, both hot and sweet! The actress now shared a pic in which she has appeared in a white dress and she looked super sexy in it. The pic was taken at Film Fare awards event. 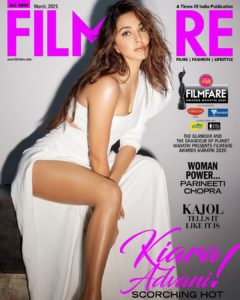