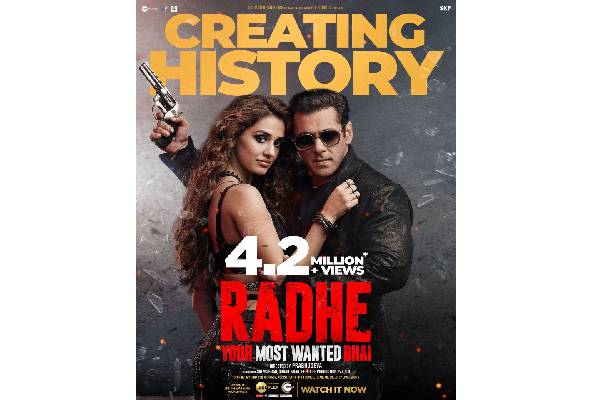 Bollywood Superstar Salman Khan’s recent offering Radhe had a digital release on pay-per-view basis. The film received a mixed response from the audience but fans lauded Salman Khan and the film. Radhe had a decent release across the international circuits and registered decent openings. The film is streaming on ZeePlex and is priced at Rs 249 per view. Salman Khan took his official social media handle to thank his fans for the response and he wished everyone a Happy Eid.

The film is said to have received 4.2 million views on its first day as per the official reports. Radhe is also streaming with the leading DTH operators apart from Zee Plex. The film is expected to have a decent weekend across the international markets. Zee Studios picked the rights of Radhe for a record price of Rs 190 crores. The film is directed by Prabhudeva and it featured Salman Khan, Disha Patani, Randeep Hooda and Jackie Shroff in the lead roles.