Switch to: తెలుగు
Home General Out of Jail, Revanth Gets Rousing Welcome 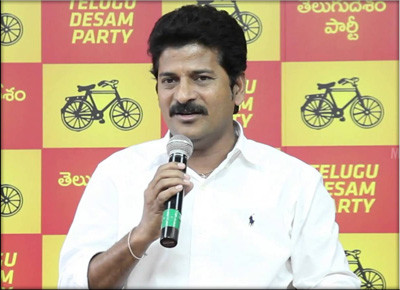 TDP MLA Revanth Reddy, who is facing cash-for-vote charges, was set free this afternoon at 5.27 PM from Cherlapally Jail.

Revanth Reddy, who had been in jail for over a month, walked free out of Jail to a rousing welcome by Family members, fellow MLAs and party workers. Andhra Pradesh High Court granted bail to the MLA on Tuesday. Thousands of Yellow flags fluttered in the air. Crakers were burst to celebrate the occasion.  TDP, which was, badly hit by the cash-for-vote scam, in which Revanth Reddy was caught red-handed by Anti-corruption bureau team, wants to enthuse the party workers by turning the occasion of release of its MLA from jail into a spectacular event. Suddenly, the jail premises transformed into an arena for show of strength.

Family members as well as Supporters of TDP MLA from as far off places as Mahabubnagar, Ranga Reddy and Anatapuramu districts arrived in Cherlapally. The plan was to take him  to NTR Trust Bhavan, TDP headquarters in a rally. First the Police did not allow the rally as it had no permission. Chants of ‘Revanth Reddy zindabad’ and ‘KCR down down’ rent the air. Later police relented. The rally proceeded towards TDP headquarters.

Addressing the huge gathering Revanth Reddy lambasted Telangana chief ministers KCR in choicest expletives. He said he would tour entire state and arouse youth against the exploitation of the state by KCR family. He said,” the people of Telangana would one day crush the family under their feet”. KCR had implicated him in a false case just because he was questioning the mis-rule of KCR, Reddy told the cheering crowds

Family members as well as Supporters of TDP MLA from as far off places as Mahabubnagar, Ranga Reddy and Anatapuramu districts arrived in Cherlapally

Co-accused Sebastian and Udya Simha were also released along with Revanth Reddy.