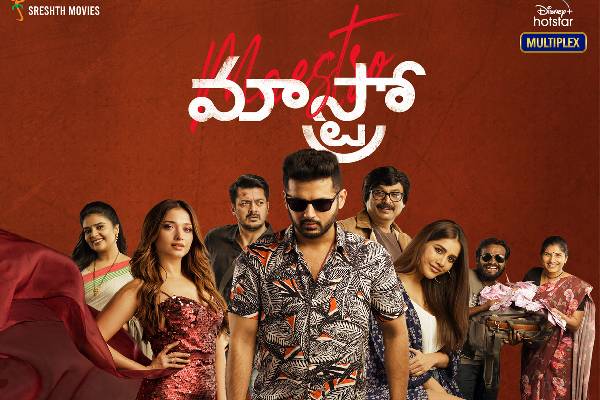 Andhadhun happens to be one of the best crime thrillers that are made in Indian cinema. The 2018 film is now remade in Telugu as Maestro. Nithiin, Nabha Natesh and Tamannaah played the lead roles in the film that is helmed by Merlapaka Gandhi. The film is produced by Nithiin’s home banner Sreshth Movies and it is now streaming on Disney Plus Hotstar. Maestro is majorly shot in Hyderabad, Dubai and Pondicherry. Here is the complete review of the film:

Maestro is the story of Arun (Nithiin) who is a piano player by profession. He believes that blind people have the best focus. Sophie (Nabha Natesh) likes Arun and the youngster too falls for her. Mohan (Naresh) is a huge fan of Arun’s piano work and he wants Arun to play the piano on his wedding anniversary. But in an unexpected shock, Mohan gets murdered on the same day and the rest of Maestro is all about the murder mystery. The film also narrates about Mohan’s wife Simran (Tamannaah)’s role in the crime. Watch Maestro to know about the unfolded twists.

Andhadhun is loved by the audience because of the tricky screenplay and the unexpected twists. The audience believes that Arun is a blind guy and they get thrilled after they come to know that he is not blind. The real story starts after this. Mohan’s murder episode. Simran and the cop (Jisshu Sengupta) try hard to know if Arun is really blind and this forms the rest of the story. The makers along with Merlapaka Gandhi decided to go with the original and not many changes are made for the script and the screenplay. Maestro is a faithful remake and will stick to the original to recreate the soul. Maestro is a thrilling ride if you haven’t watched the original.

All those who watched Andhadhun will feel like Maestro is a frame to frame copy of the original. The twists in the film are unfolded at the right time and the director took enough care of the runtime. Maestro looks racy and crisp. The entire film lasts for 135 minutes which is a huge advantage. Both the songs are good and they are not a barrier for a crime thriller like Maestro. Each and every role is well designed and the actors added life to their roles. The technical aspects make the film look grand and visually beautiful.

Nithiin wanted to challenge himself as an actor and signed Maestro. He did his best in the role of Arun. The actor surprised everyone in the tricky scenes as a blind guy and he showcases his other side in the episodes where he has to prove that he is not blind. Tamannaah got a glamorous role and she did her best for the role with negative shades. She performed well in the role of Simran. Naresh and Jisshu Sengupta were fit well in their roles and they did their parts well. Nabha Natesh has not much prominence and the actress looked aged in the role and she was not great as Sophie. All the other actors are good.

The story and the screenplay are the major highlights of Maestro. Director Merlapaka Gandhi went with the original and made minor changes to suit the sensibilities of the Telugu audience. He understood the soul of the film well and adapted it without making many changes. The technical aspects are the film’s strengths. Most of the film is shot in Pondicherry. The melodious piano theme will impress the audience. The production values are adequate and the background score is good.

Maestro is a crime thriller that comes in a new format and will impress those who haven’t watched the original. For those who watched it, Maestro is a frame to frame faithful remake.