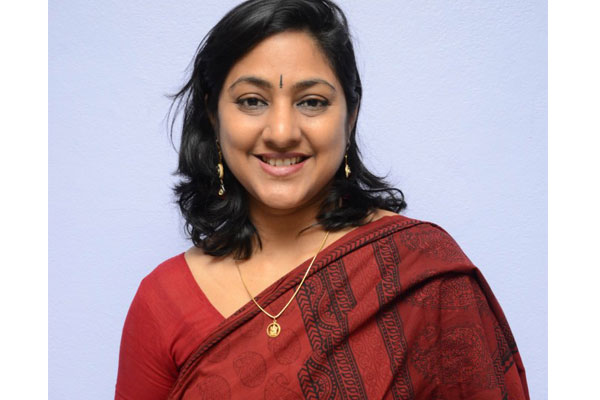 Rohini’s childhood was one of the significant reasons, she’s equally adept at Telugu and Tamil, being born in Anakapalli and growing up in Chennai. It was her father’s wish to make her an actor, something he couldn’t and well, she has become more than that now being a voice artiste, writer and also a director in her career that spans nearly 40 years. All of this and she has done extensive work in theatre too. Last seen in Baahubali, it wasn’t exactly surprising from her part that she pulled of the forest tribe dialect with unconsummated ease. Here, as she speaks to Telugu360.com, she is nostalgic about the days she spent with actor Nagesh who directed a film, Moratodu, Yasoda Krishna and filmdom in general, about the love she’s floored by and how despite all of this, she remains grounded.

‘Look into my eyes’ the director said…all I wanted was to get over with this and go back to the place we were staying, so I could play with my new found friend Babji. He is fun to play with and also he has long hair, unlike me.

‘Keep looking into my eyes’ the director said again… I looked into his eyes, going through the lines I was made to mug up in head. His eyes started to well up with tears….I felt sad too, though I did not know why. I kept looking…strangely my eyes started to fill up with tears too. The director moved me into the marked position and said ‘Lights on, start camera…action’

I started saying the dialogues with tears rolling down. There was applause after director said cut. Everybody was happy with my shot, the director patted me on my head…someone wiped my tears. My dad was all smiles and that was good. The director said ‘never use glycerin for her…she can cry without the help of glycerin’ I was proud to hear him say that. Those are the words of the actor Nagesh. Not many people know that he directed a Telugu film produced by Suresh Productions, titled “Moratodu”. I played the son of the main character ‘Moratodu’ (thug) played by Sathyanarayan Garu. He would not allow the makeup man to use glycerin for me. I remember Nagesh sir for that simple gesture of not wanting to put a child through the ordeal of having to use the stinging substance. He would treat me with chocolates and balloons too.

Only now I realize the privilege I had working with such legends. As a child they were just nice or rude people for me. And my relationship with acting was a love hate one at that time. I loved the attention and adulation, hated having to do all the acting stuff. Loved going to different places but hated being away from school or non interaction with my peers. I liked to boast to my friends about all the new clothes I could wear, hated the early hours.

It was a journey of a whirlwind. We had to get up at ungodly hours to done the makeup of blue grease paint…that too in cold hours of Mysore city. Every day the makeup man used to promise me that he will get warm water to mix the pan cake with to make me look like a Krishna in the film ‘ Yasoda Krishna’. Till now I am waiting. It may look like I am complaining….but truly I am not. I am just trying to recount the days of my childhood. I was fortunate enough ( so my father says) to sit in the lap of the legendary actor S. V. Ranga Rao cause he wanted me to relax and look confident enough to scare Kamsa the character he was playing. I played Krishna obviously folks…

He gave me orange juice to drink, joked with me and was friendly to me. I tried to focus as instructed by my father and director C.S Rao garu on standing steady while the trolley on which I was standing was being pulled forward and S. V. Ranga Rao garu acted scared while walking backwards. The only hitch was when the trolley stopped I used to sway with the impact of stopping the trolley and Lord Krishna cannot sway like that. They shot for long and at last decided whatever they got will do. When S. V. Ranga Rao garu passed away, my father took me to pay our last respects. All I could wonder was why the huge man was lying down and has cotton in his nostrils. I will never forget the day…not for realizing the fact that we lost a great actor (he was the greatest indeed) but for the incident that my father losing his wallet in all the rush and for the reason that I had to walk almost two kilometers to reach home. Actors like Nagesh sir Ranga Rao garu are not made these days , they happen to us once in a while. Am I not fortunate to have them as my playmates for little while and in the course of all that, also work and interact with them?  The work is immortalized too on screen…what more can any actor ask for? But the little me asked for mundane things like fire crackers on a Deepavali day, to attend the sports day to participate or just to collect egg shells of lizards.

In the documentary ‘Silent Hues’ I made on child actors in 2007 I tried to see if all this changed from the days I was a child actor. But children are children with simple wants and non filtered expressions…just like situations are situations instigated with wants of elders. I strongly recommend that you do not watch the film if you do not want to look at the other side of glamour and glitter.

Behind the glamour of attention and adulation of lakhs of people, there are long hours of hard work and thankless scare of flops. There are gossip columns looming larger than the ghosts we create on screen and there are bounced cheques as a remembrance. But there are also warm welcomes into the unknown families we entertained, there are praises beyond our imagination for the job we get paid to do. Here I must state that I always felt a sense of wonder at all the appreciation and awards we actors receive for simply doing our job as it was supposed to be done and have done it like any other to earn a living. It sometimes over cedes the fetes of war heroes. We are heroes for the collective conscious and at the same time normal human beings too…our clocks ticking with equality.

We shine and fade but have a place in the archives unlike many. We have several roles to play but sometimes take our parts too seriously enough to try and become the heroes of the society. We are trained to deliver dialogues written by great thinkers…almost every time believing that we are the real heroes. It is a world swinging between real and fake…the fortunate are the ones who recognize both in its respective cloak. The clothes we wear are not our own just like the hopes we raise in our viewers are not ours. Take our performances and our hard work seriously, keep us in your hearts not on your head. We can’t even pay for your haircut…it has to come from the salaries of your hard earned hours of work.