In shocking news, the only one MLA in Telangana state from the Bharatiya Janata Party (BJP) Mr. Raja Singh Lodh has Rowdy Sheet with Mangalhat police under the jurisdiction of West Zone of Hyderabad Police Commissionerate. It was found when few rowdy sheeters went to the police station for the regular attendance and the name of the MLA is displayed at the row number 24 in the history sheeters’ list. It was also mentioned that he is an MLA.

Soon after the news was spreading over social media, Mr. Raja Singh responded on the matter and alleged that it was a conspiracy by the ruling TRS party and its alliance AIMIM. “It was a conspiracy behind me. I came to know today that a rowdy sheet has been registered against me with Mangalhat Police,” he said.

He alleged that the police have become a puppet and are under the clutches of the AIMIM leaders. “Earlier they were working genuinely but, now they are acting as per the directions by the AIMIM with the support of the ruling party. The TRS always tries to eliminate the opposition. In order to achieve its goal, it is targeting me. The government is digging my criminal background due to the high pressure by the AIMIM,” he said.

He questioned the chief minister Mr. KCR that was there no rowdies in the ruling party? “Even few ministers are involved in crimes and the government should focus on it,” he demanded. 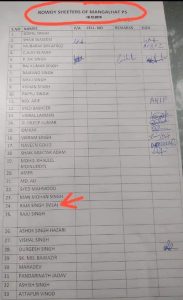