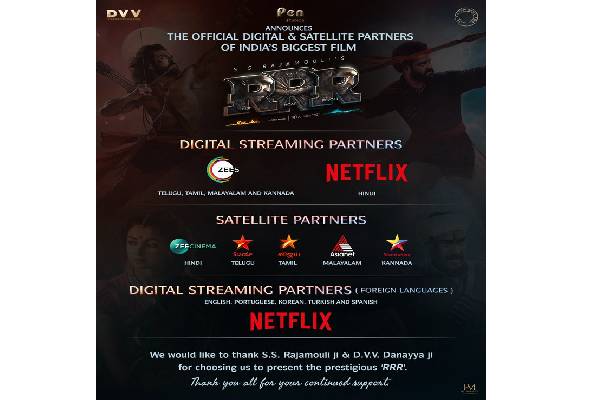 RRR happens to be the most awaited Indian film and the film is expected to hit the screens next year. Top Bollywood production house Pen Studios shelled out huge money and acquired the major rights of the film outside Telugu. Now Pen Studios announced that RRR will have its digital release in five International languages: English, Korean, Portuguese, Turkish and Spanish. RRR will be streaming on Netflix and the film will be available on all the International languages on the top digital platform.

RRR will release in Telugu, Hindi, Tamil, Kannada and Malayalam languages in India and Zee5 acquired the digital rights of the Indian languages except Hindi. Netflix holds the digital rights of the Hindi version. RRR is currently in the last leg of shoot. Directed by SS Rajamouli, the film features NTR, Ram Charan, Alia Bhatt and Olivia Morris in the lead roles. DVV Entertainment are the producers.