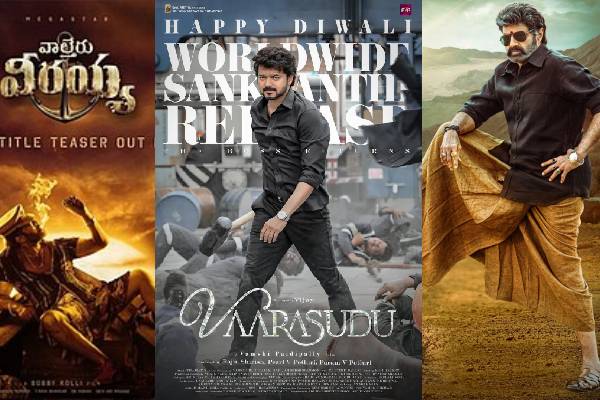 Two veteran Tollywood actors Chiranjeevi and Balakrishna are testing their luck with their respective films Waltair Veerayya and Veerasimha Reddy for Sankranthi 2023. Though the exact financials are yet to be revealed, Sankranthi season will have a bet of Rs 250 crores in total. Vijay’s Varisu is the other release and the film caught attention as it is produced by Dil Raju. Though Vijay’s Telugu theatrical market is capped at less than Rs 15 crores, Dil Raju has been quoting high prices for Varisu. The theatrical rights of Waltair Veerayya and Veerasimha Reddy are more than Rs 200 crores including all the territories.

As both these films are mass entertainers, the distributors and exhibitors would bet big on both these projects. The word of mouth will be crucial for these films. Vijay’s Varisu will take off to a great start in Tamil and the performance in Telugu depends on the result of the straight Telugu films. Varisu is a family entertainer and is the next film of Vamshi Paidipally after Maharshi and would take the advantage of the family crowds. The total bet on the Sankranthi 2023 releases would touch Rs 250 crores in total.