Ashoka Vanam Lo Arjuna Kalyanam (AVAK) is all set to hit the theaters on March 4. Ahead of the release, the makers have released an interesting lyric video of Orori Chinnavaada song.

Set in rural backdrop, heroine Ruskhar Dhillon appears in trendy look in the song and sings about her (future) spouse and welcomes him. Jay Krish has provided folkish score, while Sanapati Bharadwaj Patrudu has given interesting lines.

Rendition by Ananya Bhat and Gowtham Bharadwaj and cool scenes throughout the video that runs for almost four minutes leave the right impact. The film is about Arjun Kumar Allam played by Vishwak Sen and Pasupuleti Madhavi played by Ruskhar Dhillon. How their impending wedding happens with twists and turns is apparently the bottomline.

Directed by Vidya Sagar Chinta, AVAK is bankrolled by Bapineedu B and Sudheer Edara on SVCC Digital banner. The film will be presented by BVSN Prasad. 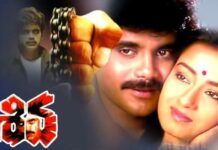 Nagarjuna’s Shiva to have a Digital Release