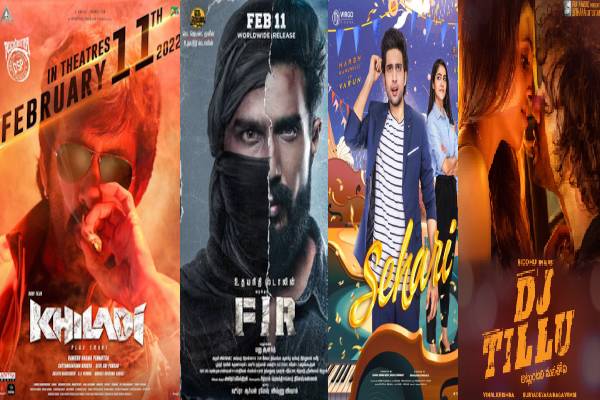 After Sankranthi season, there are no notable releases in the recent weeks in Tollywood. The exhibition industry is back in the struggling phase as the theatres are shut due to the lack of new releases. Tollywood pins many hopes on this weekend as four films are releasing on Friday and Saturday. Ravi Teja’s Khiladi is releasing this Friday and the film is carrying good expectations. Ramesh Varma is the director and the trailer caught everyone’s attention. DJ Tillu, FIR, Sehari are the other films releasing on Saturday.

DJ Tillu is carrying good expectations and it is expected to cater to the youth audience. Siddhu Jonnalagadda and Neha Shetty are the lead actors in this romantic entertainer. Apart from these, three films are heading for OTT release. Priyamani’s Bhama Kalapam will stream on Aha from Friday. Vikram and his son Dhruv’s film Mahaan will be streaming on Amazon Prime from 10th. Sumanth’s rom-com Malli Modalaindi too will be streaming this weekend on Zee5. Tollywood audience will have options of 7 films this weekend.