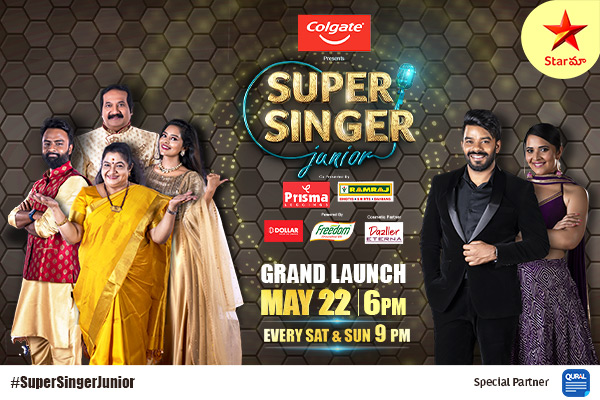 The Audience-favourite Telugu Channel Star Maa is all set to cater to the entertainment needs with a new reality show, Super Singer Junior. Talented singers from across the world will now compete in a race to become the new sensation.

Having introduced magnificent talent and wonderful voices to the film industry many times, Star Maa is gearing up to introduce young talent from everywhere. Many of the people who participated on the Star Maa Star Singer stage have gone on to become good singers.

The show “Super Singer Junior” is just for the youngsters and is sure to entertain and enthral us all. The series, which will include children aged 6 to 15, is all set to provide as much variety and enjoyment as possible. Earlier this year, the channel had aired a promo calling for the entries and has managed to receive a splendid response. The channel had received more than 3000 entries from Telugu and other states.

After a number of stages and filters, 14 of the top contestants qualified for the show. The “Super Singer Junior” series bring these uniquely talented 14 to compete for the trophy. Television stars Sudheer and Anasuya are going to host the show and bring in all the enthusiasm they are known for.

The trailer of the grand launch has already won hearts by giving a sneak peek into the spontaneity and spark that the kids have added to it. Singer Mano, who has sung thousands of songs in many languages and dubbed many films, is the judge of Nithya Vasantha Koyila Chitra, Sensational Talents Ranina Reddy and Hema Chandra.

“Super Singer Junior” on May 22 at 6pm on a grand note as many singing superstars join for the grand launch. The show is to air every Saturday and Sunday at 9pm from the following week.