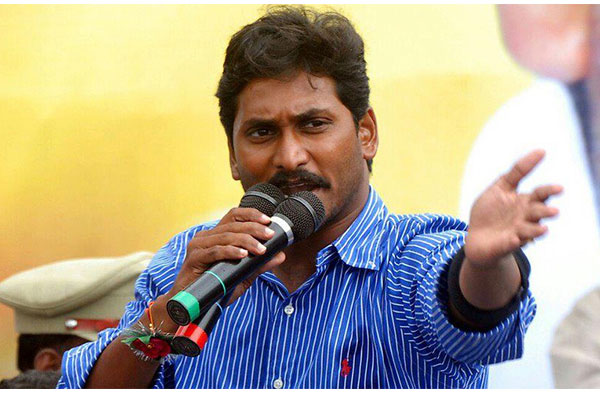 Opposition leader and YSRC president YS Jaganmohan Reddy again predicted the fall of TDP government very soon. “The government’s days are numbered. There will be elections soon and the TDP will be bundled into the Bay of Bengal,” Jagan said in a gathering of farmers in Tanguturu, Prakasam district. Jagan was in the town to have a look at the tobacco auctions and console the families of tobacco farmers who committed suicide due to non-remunerative prices.

Blaming the TD P government for the crisis the tobacco farmers were in, he said, the auction should have started in at January and ended in June. “But, now the tobacco auction is still on. If the tobacco is kept for a longer period and particularly during the monsoon, it tends to lose color due increase of moisture content resulting in lesser price,” he said. He called upon the farmers to fight and bring the government to its knees. 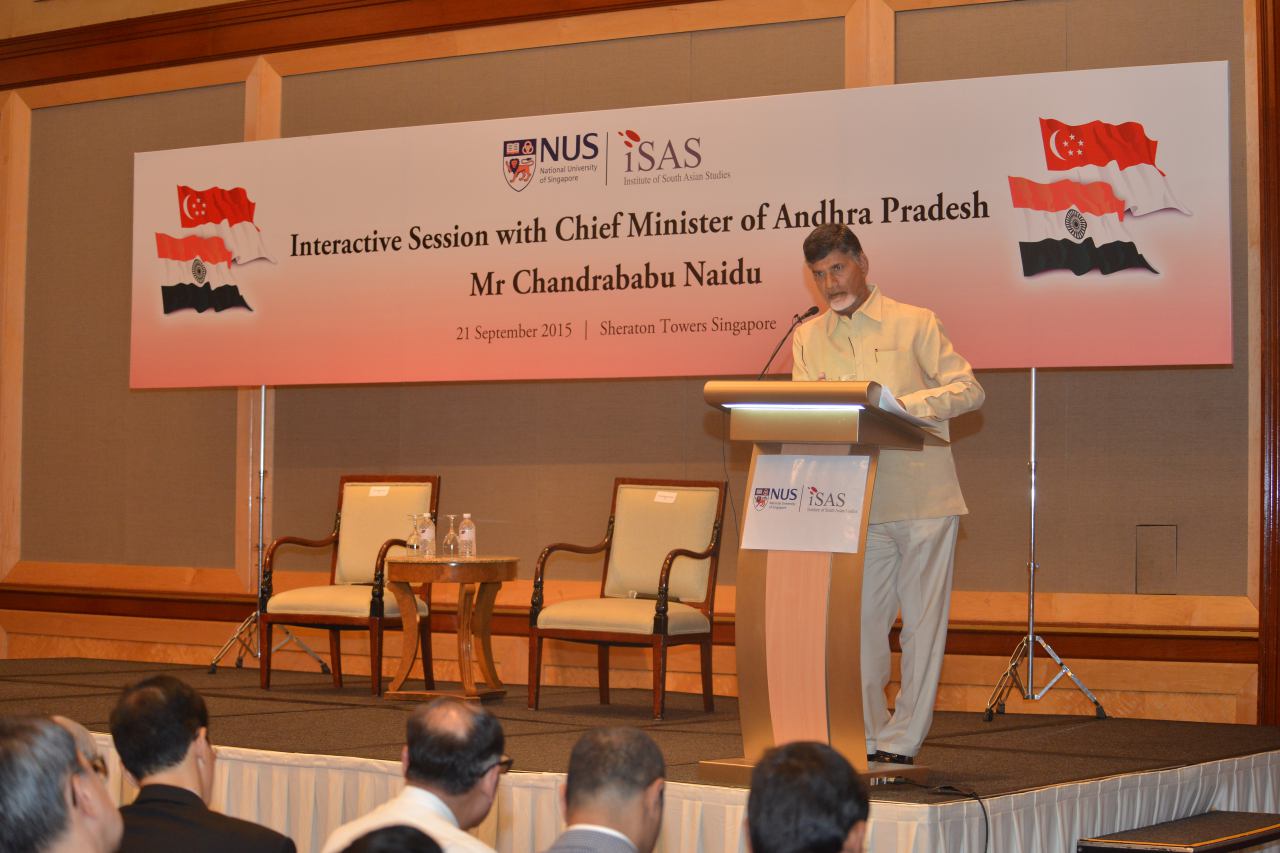 Chief Minister Chandrababu Naidu said his objective was to transform Andhra Pradesh into Silicon Valley of India. Addressing an impressive gathering at the Institute of South Asian Studies (ISAS) in Singapore on the second day of his trip to Island Nation, he said India was moving in the right direction and along with China and the US, India would become the third leading economy in the world by 2050.

“We have a long sea coast. We are the only state with such a long coastline on the East and we are planning to develop this as Logistics Hub of Southeast Asia,” he added. Then chief minister announced to the elite gathering of the Institute amid applause how he took up task of linking to mighty rivers of South India namely Godavari ad Krishna. Despite challenges, the Chief Minister said, the government sees capital building as one of the greatest advantages for the state. “Indian Prime Minister Narendra Modi has accepted our invitation to lay the foundation for Amaravati on October 22nd. I will be meeting Singapore Prime Minister tomorrow, to invite him for the historic occasion on October 22nd,” he said.

“I’m also happy to inform you that our state has been ranked second in ‘Ease of Doing Business’ by World Bank., after Gujarat. I’m confident that we will rise to the top spot next year. We will be a distant number one.”

Meanwhile, an entrepreneur, who has an industry in AP, said he had suffered from lack of power for last five years. Naidu responded to this by stating that the stage had given priority to power sector. “Now, our T & D losses stand at 10.4%. We will soon bring it down to to single digit.”

Q: Do you think that the following democratic tradition will constrain the efforts for economic development ? What assurance can you give us that politics won’t trouble the new state ‘s efforts towards development?

Naidu: “it all depends on the quality of leadership. A motivating leadership and stable leadership can balance development. For example: The previous government at the Centre brought in the Land Acquisition Act. It made land acquisition impossible. But, to create a win-win situation for everyone in the state, I adopted the land pooling system where people responded to my call. We have procured 33,000 acres of land with land owners voluntarily giving their land, with the hope of getting better value for their land in future. Despite being a Democracy, we have completed such a massive task with people’s support.”

Q: What would AP do to help start-ups?

Naidu: I want to make Andhra Pradesh the Silicon Valley of India. In my last stint as the Chief Minister, I had promoted a lot of entrepreneurs. Now, I want to start-ups and MSMEs We already have established a Start-up Village in Visakhapatnam. We are also going to start the Innovation Fund. That apart, a venture capital fund and incubation centre are on cards.

Q: How are you balancing environmental concerns with fast clearances of projects? Can you do environmental impact assessments in such short time?

Naidu: We will take all measures for environmental assessments and follow regulations. Other routine clearances will be granted within 21 days. For a greener state, we will go in for massive plantation.

Naidu: I want to make AP an education hub. In my previous stint, I have increased the number of engineering colleges from 30 to 300. We also brought a lot of focus on biotechnology.

Q: What are you doing to get good universities to AP?

Naidu: I’m networking with many world-class universities. And, we are also inviting foreign faculty members to come as visiting professors to our colleges/universities.

TDP first-time MP Dr Ravindra Babu is known of for unorthodox practice of politics. He forgets that he is a member of a political party and bound by the rules and norms of the party follows. Ravindrababu, an IRS officer turned politician is brimming with the enthusiasm to reform the society overnight. Though his concern is genuine, he is not supposed to put his ideas across as a rebel, but like a member of the political party.

The other day, in a TV panel discussion, the talked something about alcoholism among the forces. Later he stoked a controversy by commenting on the practice of our space scientists who perform pujas before launching satellites and immersion of idols in the water resources. Though he sounded rational he should not forget that he is not a rationalist on mission of debunking superstitions. He represents a party which holds a different policy on such subjects. Can he talk about the vastu mania of his party president and the burden it is putting on the taxpayer?

Since he is a first-time MP his party may be giving long rope for him, or his boss might not have found time to concentrate on these issues, because TDP supremo is caught up in still bigger problems. Now, he raised an interesting subject one should think of.

Now, the MP from Amalapuram, East Godavari district, raised a banner of revolt against the selling of low-spirit beverages to young people freely in the name of Breezer. His target is Bacardi Breezer which contains 4.8 per cent alcohol, covered in fruit flavors. According to Ravindrababu, who is a qualified MBBS doctor, such type of Breezers would serve as gate-way-drinks into alcoholism. Its a genuine concern from a doctor. “We should not forget the fact that Bacardi is an international alcohol major and has been into the manufacture and sale of different varieties of liquors,” he cautions.

He is planning to write letter to Prime Minister Modi, union health minister and other officials of union health department.

On Wednesday he had a breakfast meeting with union urban development minister M Venkaiah Naidu where he discussed the Reventh Reddy episode and phone tapping T-government.  Venkaiah is expected to brief union home minister Rajnath Singh and BJP president Amit Shah. Naidu is scheduled to meet Prime Minister Modi at 4 pm and Shah at 5.30 pm.  He will also call on President Pranab Mukherjee at 7 PM.

Naidu’s plan is to weather away the  negative fall out of cash-for-vote-sting operation conducted by T-ACB on TDP MLA Revenath Reddy with an effective campaign against the tapping of AP chief minister phone by Telangana government.

Though bold-faced initially, the T-government appears to have realised that he was going overboard, started denying phone tapping.