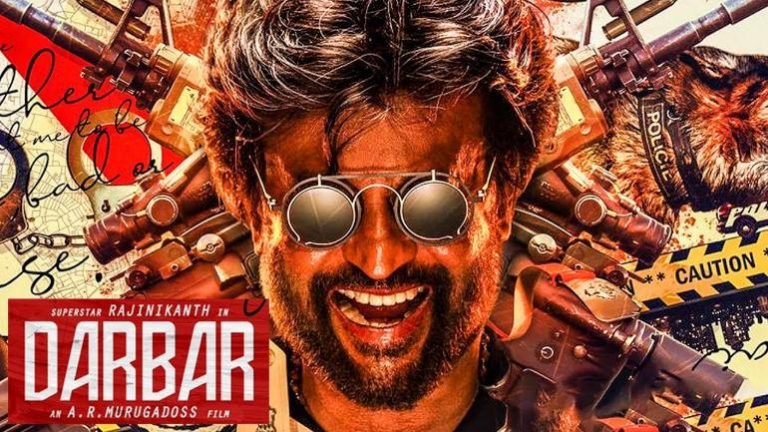 The story starts as Mumbai Commissioner Aaditya Arunasalam killing a lot of gangsters in encounters. The ruthless cop Aditya has been deployed to Mumbai to combat with Drug Lords, he goes on killing spree . There is a personal loss behind the killings and how he manages to take revenge is the crux of the film

After two decades , Rajinikanth dons a cop role a m he is outstanding as commissionar Aditya . He looks younger, fit and energetic. His walking style ,mannerisms are Deja vu for the audience. Coming to the script ,A R Murugadoss hasn’t shown his uniqueness but banked on Rajini’s charishma.

First half of the film has racy screenplay ,being a mad cop story the director has utilized the freedom to go all out. There is a wafer thin story , Darbar has built scene after another just to elevate Adithya Arunchalam. Drug lord Ajay Malhotra impersonation episodes are smart mostly , bit confusing at times.

Ajay Malhotra’s dad Hari Chopra role is played by Sunil Shetty. His character was introduced right before the interval , elevated through out. But when it comed to final showdown with the hero , Sunil Shetty’s character is not properly designed.

Anirudh Ravichandran’s songs are decent enough and background score is outstanding. Stunts by Ram-Laxman , Peter Heins are mass appealing and few are good.

Among the supporting roles, Yogi Babu is good with his comedic timing. Nivetha Thomas performance as Aaditya’s daughter is pretty impressive. Nayanatara role is very limited , nothing worth mention about her character.

Darbar is specially made for Rajini fans. If you are a fan of Rajini at any point of his illustrious career , then this film is for you. First half of the film is good , second half is not up to the mark for common audience.