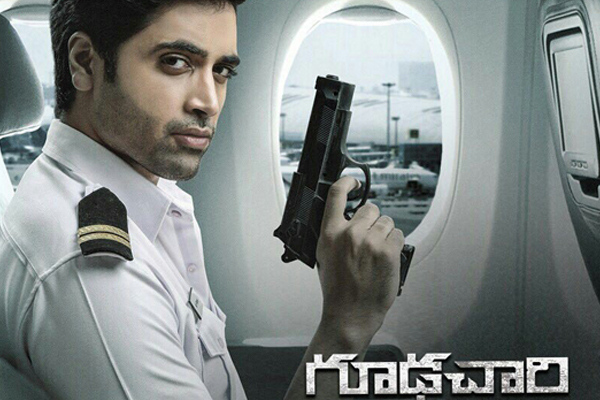 An Indian national security operations team Trinetra’s agent Raghuveer dies in 1995 in a special operation. Fast forwarded to 2017, his son Gopi is passionate about serving the country in similar job. Despite 174 applications Gopi won’t be shortlisted to any agency. After being tested practically, Trinetra agency admits him into their secret group. Terrorists who eye on the agency,traps the information, assassinate the top brass of the organization. They frame Gopi responsible for these killings. Gopi who is on the run works to

Widely touted as a spy thriller, Goodachari opens in a promising manner. Gopi (Adivi Sesh) ’s childhood episode establishes basis for his desire to join the security agencies. Later when he grows up, the scene in which secret agency tests his calibre is interesting. Once hired by Trinetra, the training phase scenes flow smooth. After training phase is completed, each agent has been deployed to different zones. Ex-heroine Supriya plays a key role as madam Nadiya. Ex-Miss India Shobita Dhulipala as Sameera plays a smaller but important role as Gopi’s girlfriend. The cat and mouse game between the terrorists and security agency continues to a final showdown interval block. There is an interesting twist here in the way villains frame Gopi. Overall, Goodachari’s first half has been dealt with grip. The director has set the right premise for the next half. Personal side of Gopi has been blended well with main theme (National security agency). However, once Gopi is on run, the tight screenplay goes haywire and plot dilutes. Instead of being a spy mission, Goodachari’s theme narrows down to mere ‘on the run fugitive’ story largely. There is a twist to cover up this, this fugitive has a doubled edged objective. One is to hide himself from police, same time find the culprits who killed his bosses. Climax twists and closing shot are good and saving grace for second half. Closing shot raises the curtains for Goodachari – 2

Due to budget constraints, the large canvas story doesn’t get adequate production values. However, the director Shashi Kiran Tikka and his technical team must be appreciated for delivering decent output with limited budget. Background score by sricharan pakala is very good. Editing is excellent in this film, cinematography by Shaneil is good as well.

On flip side, India’s #1 secret agency operating from a disguised tailor shop, terrorists keeping an eye on the #1 agency’s office with so ease and grabbing all the information they require through their insiders doesn’t sound logical, and the main villain (Name kept secret as per makers’ wish) thread is in-convincing.

Goodachari is a well-made action film blended with father-son sentiment. This film is more like a crime investigation genre film disguised as a Spy Thriller. It starts off on a bigger canvas, as progress, pushes itself to a smaller canvas. Nonetheless ‘Goodachari’ is an appreciable effort on Telugu screen, on return on investment basis, we have a winner at box-office! 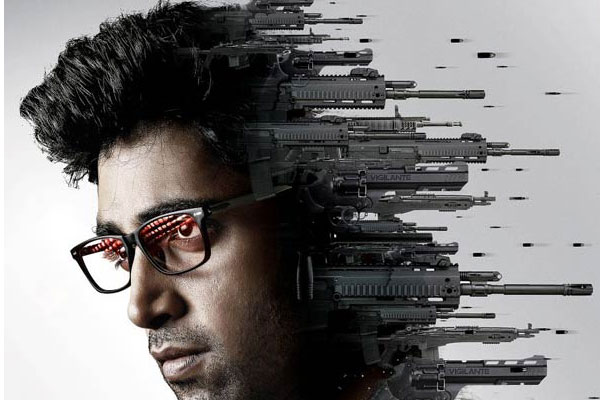 Seven films, All being Straight ones, will hit the theatres this weekend (Aug 3rd – Aug 5th), out of which Goodachari, Chi La Sow and Brand Babu have sort of awareness while the others will find tough to find any audience.

Goodachari is eyeing to dominate the weekend’s race with better buzz and release size amongst all. The film is releasing in 300 Locations which is widest ever for Adivi Sesh. It is also looking to record career best numbers for him. All India theatricals of the film are valued for 4 Crores.

Chi La Sow on the other hand is sure to take the second place and has chances to give tough competition for first place if the reports come out better than Goodachari. The film is releasing in 230 Locations which is less than the other film and that’s why it’s needs a much better word of mouth to come on the top. All India theatricals of the film are valued for at least 3 Crores.

Brand Babu, which is Sumanth Shailendra’s Debut film as a hero in Tollywood, will come out in the third place unless things go completely wrong. The film is having a good release size of 190 odd locations. Popular director Maruthi has provided the story for this film. 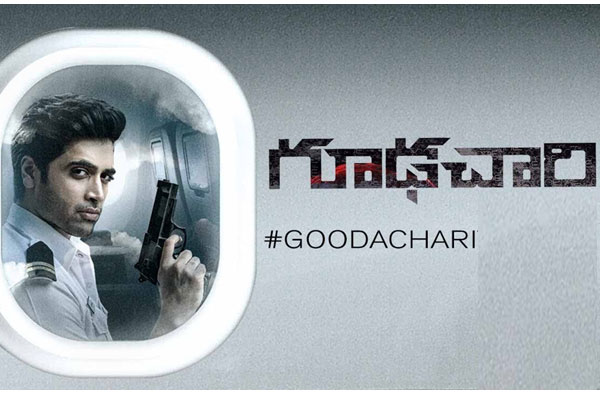 Adivi Sesh – Sashi Kiran Tikka’s Goodachari is gearing up for a grand release this Friday. The film has been bought by Anil Sunkara on First Copy basis who has sold it in some areas and is releasing on his own in rest of them. All India Theatrical rights of the film including expenses are valued for 4 Crores 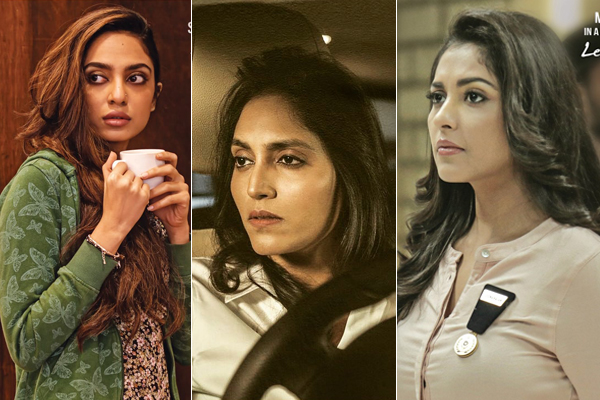 Writer and actor Adivi Sesh is back with yet another interesting film titled as Goodachari. The film is touted as a spy thriller with racy narration and gripping screen play.

Nagarjuna’s niece Surpriya Yarlagadda is making a comeback of sorts with this film. She is playing a meaty role as a RAW agent. Nadiya Qureshi is the name of her character.

Telugu girl and winner of several beauty pageants, Shobitha Dulipala is essaying the role of a psychology student in this thriller. Her role has good weight in the film’s narrative. This is her debut film in Telugu.

Godachari also marks the comeback of heroine Madhu Shalini. After appearing in a bunch of low and medium budget films, Madhu Shalini was completely away from Tollywood. She is going to be seen as Leena Rajan, a surveillance agent associated with RAW.

All these three female artists have pinned a lot of hopes on Goodachari as they look to make their presence felt in Tollywood with more notable offers after its release.

Directed by Sashi Kiran Tikka, the film is gearing up for release very soon. 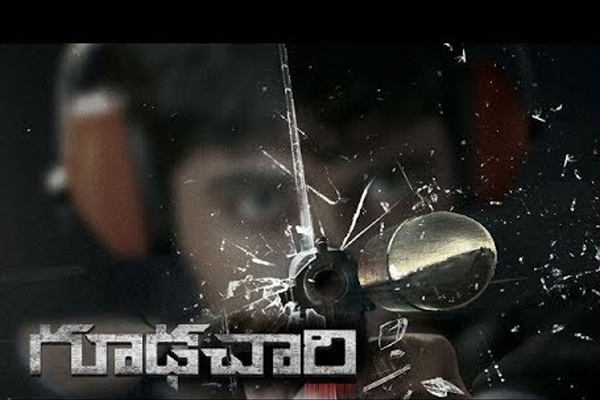 Recently, the first trailer of the film has been unveiled by Samantha Akkineni in Hyderabad. The response for the gripping trailer is unanimously positive and what is more encouraging for ‘Goodachari’ team is that they are good support from Akkineni family. The reason behind this is Nagarjuna’s niece Supriya Yarlagadda who is making a comeback to silver screen after nearly two decades.

Supriya, who made her debut with Pawan Kalyan’s Akkada Ammayi Ikkada Abbayi, is playing a meaty role which carries the film’s narrative forward.

Supriya’s presence in the film is one of the reasons why Samantha graced the trailer release event. Also, Nagarjuna and Akhil took to Twitter to praise the trailer. Sources say that Akkineni stars will promote the film big time ahead of its release.

Goodachari Teaser: The Story of a RAW Agent 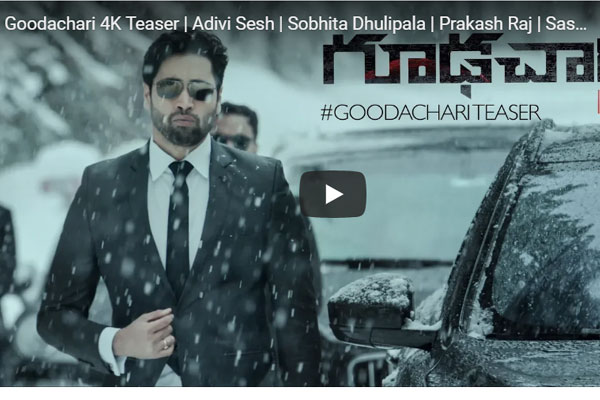 Talented actor Adivi Sesh after a hefty gap is back to race with an action thriller which has been titled Goodachari. Sashikiran Tikka is making his directorial debut with this action thriller and Shobhita Dhulipala is the female lead. The teaser released today has been packed with loads of stylish stunts and they have been captured in extensive locales across the world.

Adivi Sesh plays a RAW Agent who is patriotic and is well trained. The teaser promises a thrilling ride throughout and background score has been elevating. Prakash Raj, Supriya, Anish Kuruvilla, Madhu Shalini and Vennela Kishore essayed other pivotal roles in Goodachari. The teaser on the whole leaves one of the finest experiences and is a visual treat. Abhishek Pictures and People Media Factory in association with Vista Dream Merchants bankrolled Goodachari which will release on August 3rd. 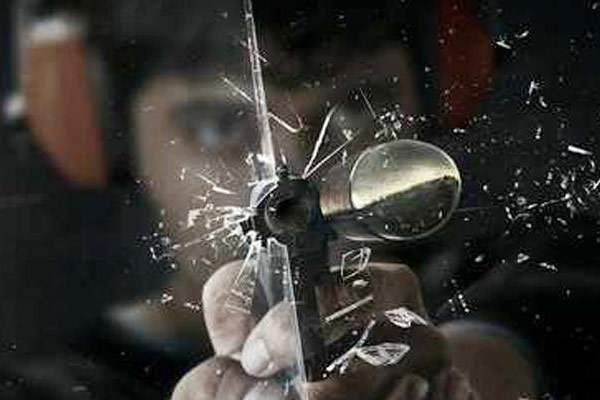 Following the success of Kshanam, Adivi Sesh signed a espionage thriller titled as Godachari which has him playing a spying agent. The film’s story is set in the backdrop of USA and majority of shoot happened there.

The latest update reveals that the shooting formalities have been wrapped up and the makers are planning to release the film very soon. The first look poster was released earlier this year. A teaser will be out shortly.

Directed by Sashi Kiran Tikka, the film has Shobitha Dulipala as the female lead. Abhishek Nama is the film’s producer. 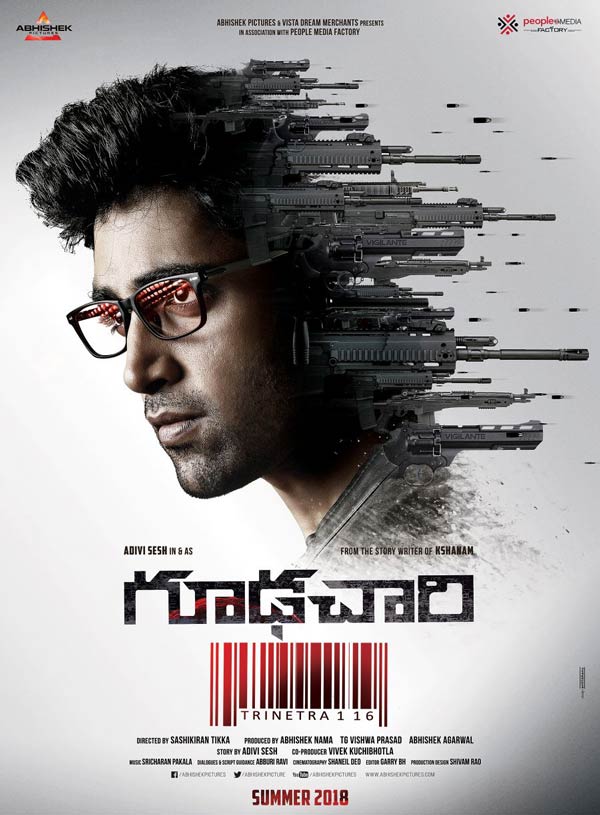 After scoring a runaway hit with Kshanam last year, talented actor Adivi Sesh took his own time and signed yet another interesting flick which has been titled as Goodachari.

The first look poster of the film has been unveiled today evening and it straightaway captures the attention for its intriguing depiction of the film’s theme. The poster featuring Sesh with a serious look and has a slew of weapons and bullets in the background hinting ‘cloak and dagger’ stuff in the film. The interesting poster has raised the curiosity levels of audience.

Adivi Sesh himself has penned the story for this film which marks the debut of Sashikiran Tikka as director. Shobita Dulipala is the female lead and Abhishek Nama is the producer.