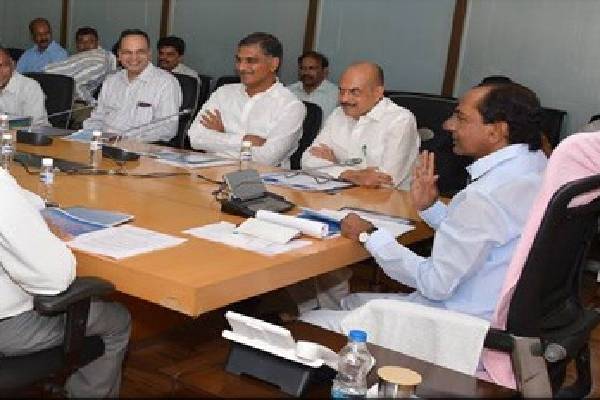 The KCR government seems to be rattled by the outcome of the Dubbaka elections where it received a drubbing in the hands of the BJP.

In an overnight decision, Chief Minister K Chandrasekhar Rao has called for a Cabinet meeting to discuss crucial issues.

Chandrasekhar Rao seems to have taken the defeat of the Dubbaka elections quite seriously.

The defeat of TRS in Dubbaka has come as a huge embarrassment to the party as the constituency shares its borders with Gajwel, represented by K Chandrasekhar Rao, Sircilla which is represented by the Chief Minister’s son and IT Minister KTR, and Siddipet which is the stronghold of CM’s nephew Harish Rao. The BJP seems to have made its first big has made deep inroads in the state which appeared to be impregnable with K Chandrasekhar Rao being at the helm of affairs.

Further, the Cabinet meeting will also discuss the upcoming GHMC elections which are likely to be held on December 4, and a notification to this effect
could be issued after Diwali.

In yet another development, it is learnt that KCR held a meeting with MIM president and Hyderabad Lok Sabha MP Asaddudin Owaisi to discuss the strategy to be adopted ahead of the GHMC polls.

The TRS will be making all-out efforts to defeat the BJP, which is slowly emerging as the main opposition party in the state, at the GHMC elections. There was little doubt that the KCR-led TRS party views the BJP as a greater political threat than the now decimated Congress, which was the main opposition in the state. GHMC has 150 divisions. In 2019, TRS won 99 seats followed by MIM (44), BJP (4), Congress (2), and TDP (1). At the meeting with Owaisi, KCR is likely to discuss an alliance with MIM.

Fresh from Dubbaka victory, BJP state president Bandi Sanjay Kumar exuded confidence that the saffron party will win up to 100 divisions in GHMC elections. He went on to even state that the post of mayor and deputy mayor will be from the BJP. The saffron party may go to town on the alleged mishandling of the KCR government with regard to the torrential rains, flash floods, and the Covid-19 pandemic. The BJP will try to focus mainly on the TRS government’s alleged failure to provide relief and rehabilitation to the affected families of the recent floods and COVID-19 patients.