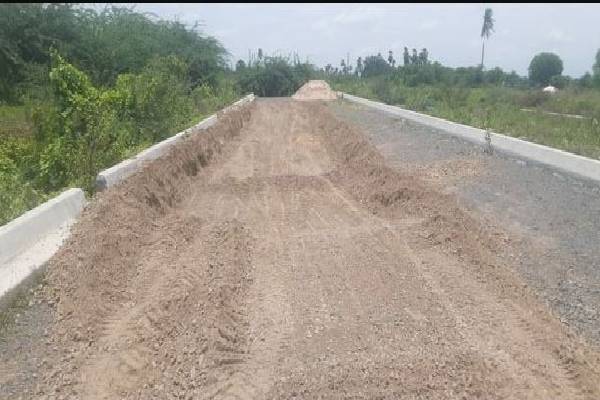 Thieves are on prowl in the capital Amaravati. They are not filching valuables and nor are they resorting to house-breaks. They are simply “stealing” the roads. Yes. Sounds strange, but true. In Amaravati, unidentified miscreants are using earth movers and under heavy duty equipment to damage the laid out concrete roads and take away the concrete pellets and other material.

Several videos of JCB earthmovers damaging the roads and taking away the granite chips have surfaced in villages like Uddandarayuni Palem, which falls into the Amaravati capital area. In one video, miscreants are seen taking away a JCB on a truck after the locals objected to it. It is clear that this cannot happen without the active support of powerful people. The local TDP has accused the YSRCP of damaging the roads and taking away the concrete chips.

There are also instances where the concrete chips, cement and sand kept on the sides of the road for the construction of roads were stolen. Some miscreants are landing up at the storage sites and are loading the material into the trucks. They are scooting away before the police arrived on the scene. While the TDP has blamed the ruling YSRCP for the “theft”, the YSRCP is blaming the TDP for this. The police seem to look the other way while the roads get damaged during the nights. Sources say that the police are afraid of taking action as people at high places are involved in these thefts.

In some places, the locals have formed night-watch groups and are found objecting to the damage of the roads. There are instances where the miscreants fled from the spot after the locals obstructed them. Despite such damage to public property, there is total silence from the ruling party.