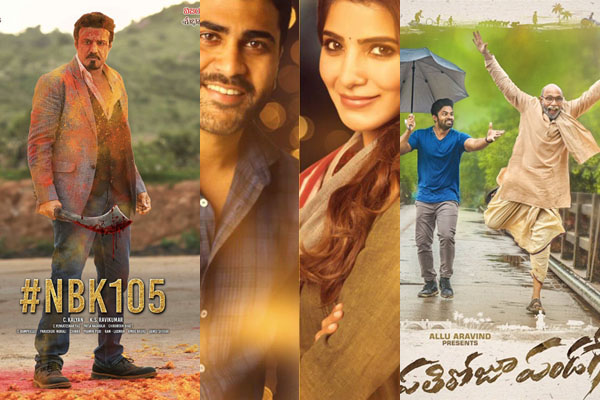 Superstar Mahesh Babu and Stylish Star Allu Arjun decided to clash for Sankranthi and announced their respective films for January 12th 2020 release which left Tollywood in huge shock. Now, Christmas too is heading for a huge clash and we have some exclusive updates about the releases during the season. Nandamuri Balakrishna is busy with his next film directed by KS Ravikumar. The film releases on December 20th. Dil Raju pinned many hopes on 96 remake which featured Sharwanand and Samantha in the lead role.

The film too is in the Christmas race as of now and will release during the holiday season. Sai Dharam Tej’s next family outing Prathi Roju Pandaage directed by Maruthi is in the last leg of shoot and the film too releases on December 20th. As of now, three films are heading for release which is not a healthy sign. Last year, Padi Padi Leche Manasu, Anthariksham and KGF released during Christmas and KGF was the only film that fared well.

Ravi Teja’s Disco Raja and Nithiin’s Bheeshma too have been announced for December 20th release but the makers as of now decided to stay away from the busy clash. Both these films may release in February 2020 as per the update. This year Christmas is all set for a huge clash in Tollywood and the final dates may be announced soon.

Digital Rights : A bone of contention b/w producers and exhibitors

Tollywood expecting to end with a Bang