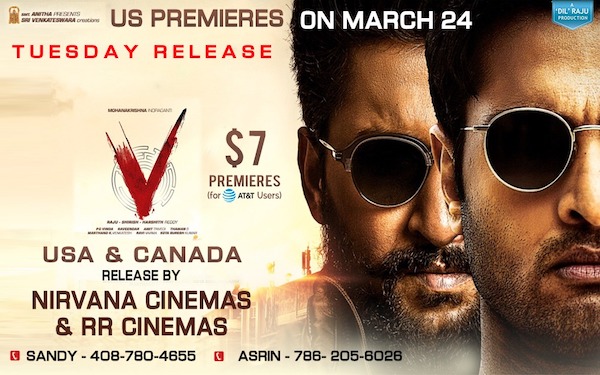 Nirvana Cinemas, the distribution house which is known to bring different concept films to overseas audience is proud to announce their next film “V” in association with RR Cinemas.

“V” is Nani’s landmark 25th film and will be a multi starrer with Sudheer Babu playing an important role. Aditi Rao Hydari and Nivetha Thomas are playing female leads. Indraganti Mohan Krishna, who delivered many hits like Gentleman, Sammohanam is directing this landmark movie.

Amit Trivedi is composing the tunes while Thaman, who is in red hot form is scoring the BGM. Dil Raju is producing this under his banner Sri Venkateswara creations.

Teaser was released on 17th February and is trending on YouTube since then and clocked more than 5 million views.

Catch the teaser here in case you missed it. Witness Nani in never before and ever after avatar.

Nirvana Cinemas and RR Cinemas would like to thank Dil Raju garu and Sirish Garu for this opportunity. This is our second time collaboration with Indraganti Mohana krishna garu after Sammohanam and we are super excited to present this film in North America (USA & Canada).

Movie will be hitting screens on March 25th with grand premieres in US on 24th March, which is a Tuesday.

Most of you can avail AT&T discounts and other discounts to watch premieres for just $7 (AT&T Buy 1 Get 1).

For exhibition inquiries in your states/cities, please reach us at