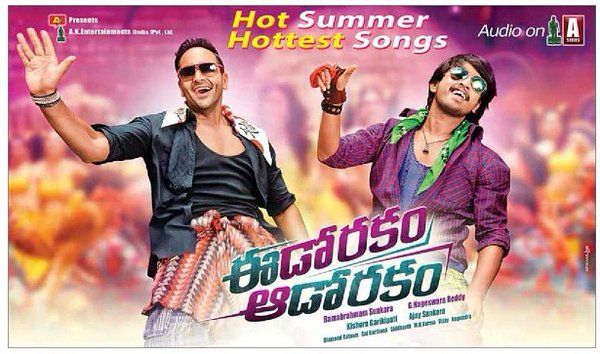 Manchu Vishnu and Raj Tarun teamed up for a multistarrer titled Eedo Rakam Aado Rakam. The film is gearing up to hit the screens this 14th. G. Nageswara Reddy, who bagged a decent hit with Vishnu’s Denikaina Ready,is the director for the film.

Reports from close sources suggest that the film will have rib tickling comedy from the start till the end. It is learnt that the film will be a hilarious ride with loads of entertainment and unexpected twists. Star comedian turned hero Sunil will be seen in a cameo role in the film.

Last night, a special screening for Manchu family and few other noted celebs was held in Hyderabad. Those who have watched the film gave a unanimous hit verdict and praised the team for making the film a complete fun ride.

The film features Sonarika Bhadoria and Hebah Patel as the female leads. Rajendra Prasad played an important role in the film. Anil Sunkara is the film’s producer.