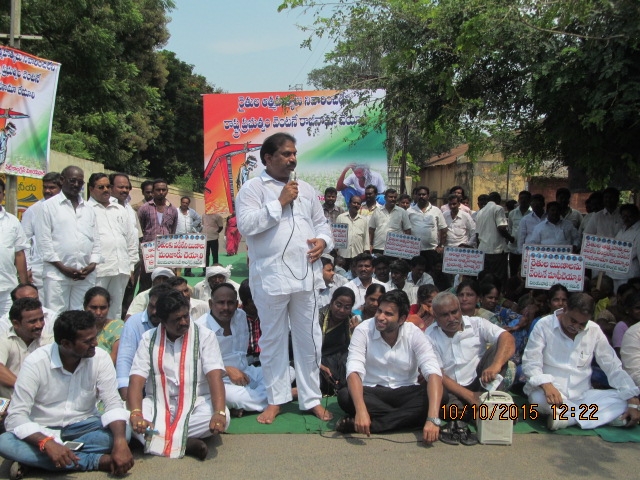 Demanding five year moratorium on Kharif farm loans, Vijayawada city Congress today staged a dharna in front of office of sub-collector in the city. Led by former MLA Malladi Vishnu (city Congress president), senior leaders of the party demanded that Assembly be convened immediately to discuss the growing suicides in the state and an all-party committee be appointed to evolve a consensual approach to stop the suicides of farmers in Andhra Pradesh.

Putting the blame squarely on the TDP governance for the crisis in farm sector, the Vijayawada city Congress leaders said government should immediately announce Rs 300 bonus per quintal to the agricultural produce to compensate for the loss in production. Talking at the dharna Malladi Vishnu wondered as to why the Telugu Desam party, which called for a bandh in Telangana on Saturday demanding full loan waiver ,was silent on the suicides in Andhra Pradesh. He charged that the defective implementation of loan waiver, instead of coming to the rescue of farmers, forcing them to commit suicides as it landed them in the spiral of debt. ” The piecemeal implementation of loan waiver has worsened the family economy of Andhra farmers. As the waiver was partial, bank are refusing to refinance farm sector. Now, with the loan pending and banks levying penal interest on balance of loan , farmers are forced to go to money lenders . Government has thrown the farmers into a debt trap which is the reason for the suicides,” he said adding the sole responsibility lies with government.

Former minister Devineni Nehru, state youth Congress president Devineni Avinash, PCC official spokesperson Kolanukonda Sivaji came down heavily on TDP government for trying to mislead the court with reduced number of suicides. Disputing the government figure of 48 suicides, the Vijayawada Congress leaders presented a list of 72 names of hapless farmers who committed suicides in Andhra Pradesh in the past one month to the subcollector. They said Andhra Pradesh would soon surpass the Marathwada, Kalahandi, Bundelkhand and Vidabha in suicices, if government failed to come to the aide of farmers immediately.