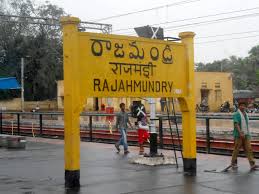 In tune with chief minister Naidu’s plan to develop Rajahmundry into a cultural capital of Andhra Pradesh, state cabinet today approved the proposal to change the name Rajahmundry into Rajamahendravaram. Naidu on the valedictory day of Godavari Pushkaralu,on July 26, announced that he would develop the city as the cultural centre of successor state of Andhra Pradesh by setting up institutes for Telugu literature, arts, literature and tourism. Rajahmundry is one of the few cities in India that has had a recorded urban existence of nearly a thousand years.

An important Hindu religious center, a center of Telugu literati and a royal capital for a branch of the Eastern Chalukya kingdom in the eleventh century, Rajamahendravaram or Rajahmahendri got shortened into Rajahmundry at a point of time in History. It is not clearly known when. But the change was attributed to British.Some dispute stating the name got shrunken during Mughal period.Chief minister Naidu assured to the people of the city that he would work to revive the past glory of the city on the Banks of river Godavari under a program called Akhanda Godavari project at a cost of Rs 100 cr. The project envisages improvement of temple towns like Palkollu, Narasapuram, Antarvedi and the Konaseema area apart from Rajamahendravaram. The CM said 51 acres of land belonging to the Central Jail would be developed as an infrastructure hub by constructing a convention centre, exhibition, multi-theatre complexes and others. He also said Telugu University, Kandukuri Veeresalingam Theistic education institutions, Damerla Art Gallery, Gowthami Library and others would be developed. Citing the reference to Vinakota Peddanaamtya’s “Kavyalankarana Choodamani” historians suggested that the town was built by Raja Raja Narendra who named it after his father in law Rajendra Chola.

The cultural history of Rajamahendravaram spans from Adikavi Nannaya to recent days via Kandukuri Veeresalingam . The city has a unique place in the freedom movement as well. Extremist leader Bipin Chandra Pal, as part of Vandemataram movement, chose to the visit the place in April 1905 and delivered an inspiring speech, which was translated into Telugu by Chilakamarthi Lakshminarasimham. The place he addressed had become popular as ‘Pal chowk’ which is now Kotipalli Bus stand. Annie Besant visited Rajahmundry twice. First, she came when the foundation of a branch of the Divya Gyan Samaj building at Alcot Gardens was being laid. She came again during the opening ceremony of the building.

Because of its strategic site on the Godavari River and on the major north-south road along the eastern coast, Rajahmundry served as a commercial center for its hinterland in the past. In the eighteenth century the British made it the administrative headquarters of a district. In the mid-nineteenth century, however, the district administrative functions were transferred to Kakinada, the sea port and banking center of the district, while Rajahmundry retained the district court, the government high school, and a few governmental engineering offices. The town thus reverted to its former position as a minor administrative center. By the middle of the nineteenth century Rajahmundry had expanded beyond the confines of the old city. The cluster of temples and houses, backed by a commercial lane, hugged the river front and left little space for new administrative buildings. The British constructed buildings far to the south of the old city, and they laid out a new residential suburb, Innespet, on a rectangular grid plan. To the north of the old city were the residences of senior British officials, ‘the Club,’ and the compounds of Lutheran missionaries. Beyond these Western residences and offices ringing the old city were hamlets, as yet unincorporated, and villages whose inhabitants worked in the town. Despite its three distinct zones the old city, the new residential areas, and the surrounding villages Rajahmundry was still, in I871, little more than a large village. It had only one commercial area and its population was just 19,000. But during the next thirty years, Rajahmundry’s population nearly doubled, reaching just over 36,ooo by 190I.

The urban growth of Rajahmundry depended on two sources: population increase and immigration. Population increase in the Godavari District, and hence in Rajahmundry, varied from decade to decade, apparently because of famine conditions there during the I870s and I890s. These decades of relatively low population increase were also the decades of Rajahmundry’s greatest growth. (with inputs from ‘Urban Government under the Raj: A Case Study of Municipal Administration in Nineteenth-Century South India’ by John G. Leonard Source: Modern Asian Studies, Vol. 7, No. 2 (1973), pp. 227-251)