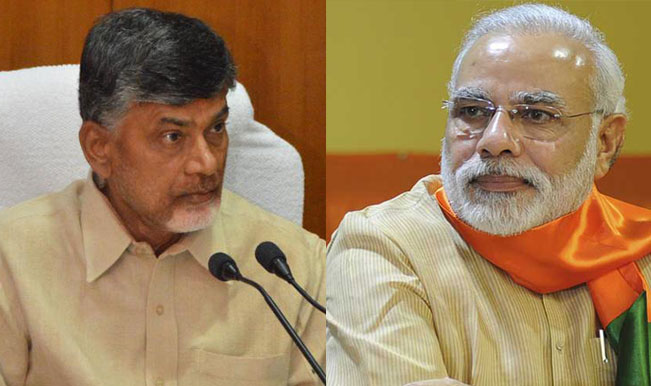 Will Modi become generous and announce a Bihar-like package to Andhra Pradesh, which has been in the throes of partition after carving out separate state of Telangana and losing the Capital ?

There is an air of expectancy among the leaders of TDP and BJP over Prime Minister Modi’s visit to the state of Andhra Pradesh. This is first political visit after the division of the state. Last year he visited Vizag area amid Hudhud disaster.

Ealier before 2014 elections, Modi visited AP as NDA’s prime minister nominee and offered moon to the people of Andhra Pradesh in the meetings he addressed in Andhra region. He used extensively the word Seemandhra. Now he is coming to lay foundation stone without fulfilling none of the important assurances given to Seemandhra, now Andhra Pradesh state, the most important one being the special status. Funding to capital construction, bridging the revenue deficit, special package to Rayalaseema and North coastal Andhra were other demands mentioned in the AP Reorganization Act.2014.

In the past fifteen months, the ruling TDP has become a punching bag for the BJP’ non-fulfillment of the assurances. When the state was simmering with discontent PM Modi announced humongous package of RS. 1.25 Lakh Crores to Bihar. After Bihar package, Opposition has mounted the criticism against TDP and BJP. Congress filed cases against PM, CM and urban development minister Venkaiah Naidu and launched one crore signature campaign. Two state-bandhs have been organized. Now, Opposition leader Jagan is on indefinite fast. However, there has been no concrete clarification from the centre on the help the NDA government going to extend to the state. This is the backdrop Modi is arriving in Amaravati on Vijayadasami day. Two days back BJP leader Kavuri Sambasiva Rao expressed hope that he was expecting an announcement of some special package for Andhra Pradesh by Prime Minister Modi. Today, state welfare minister Ravela Kishore Babu also hoped that PM would not disappoint Telugu people. ” I am hopeful the Prime Minister will spring a surprise on October 22 on the occasion of foundation laying of capital Amaravati,” he said adding that the centre was not giving anything to state was wrong and part of politics of opposition who loves not to see what was happening around.

” Centre has been assisting the state in releasing funds. Our contention is that it is inadequate for a victim-state. Our chief minister took a principled stand with regard to the NDA government. We would get nothing by confrontation. Let us get things done by cooperation. We are hopeful that centre will fulfill whatever the PM assured,” he told telugu360.com. Adding that the state had not given up the demand for special category status, the minister said,” we do not want to lose sight of the other assistance from the centre which are outside the purview of special status. We need projects, clearances, special funds etc.”

when asked about what type of package he was expecting, Kishore Babu refused to guess stating,” How can I read the mind of Prime Minister. We have place requirements of state before the union government. Let’s wait and watch,” he said.

TDP and BJP circles feel that any announcement by the Prime Minister would silence opposition leader Jagan who is creating hurdles to development of airports, ports, capital, industrial corridors etc. ” If would become a smooth sail for BJP-TDP alliance in the state if PM announced a special package. It would also enable the BJP to reach out to the people in areas where the party is weak,” a senior BJP leader said.