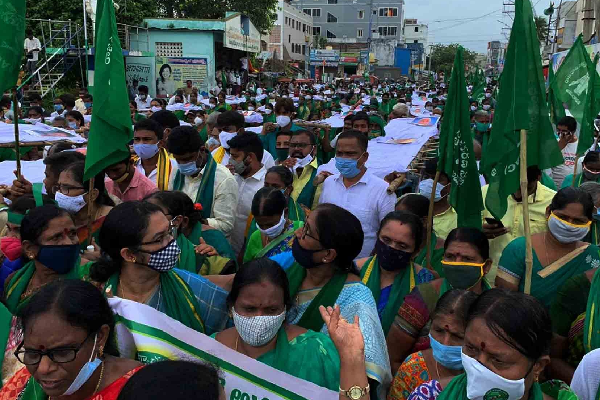 The Amaravati farmers’ padayatra “Nyayasthanam to Devasthanam” faced hurdles galore in Sarvepalli mandal of Nellore district. Local YSRCP MLA Kakani Govardhan appears to be hell-bent on disrupting the yatra. On Wednesday, the MLA’s henchmen reportedly put hurdles every step of the way.

On Wednesday, the police obstructed the Yatra and said that the vehicles accompanying the yatra such as the one carrying the deity of Lord Venkateswara were not allowed. The yatris pointed out that these vehicles were accompanying the yatra all through and that there was no point in objecting to them at this stage. Left with no option, the yatris had to stage a sit-in due to which there was a huge traffic jam. Finally, the police relented.

By afternoon, the police removed the tents arranged for the lunch programme near Podalakur. The yatris had to protest again. The police again obstructed the yatra in Taduru. The yatris alleged that Sarvepalli MLA Kakani Govardhan Reddy was obstructing the yatra. They said the yatra was apolitical and had a single demand of keeping Amaravati as the sole capital of the state.

TDP leader S Chandramohan Reddy slammed Govardhan Reddy and alleged that the democratic rights of the peaceful padayatris were being trampled upon. The CPI too strongly criticized the ruling party for putting hurdles in the way of the padayatra. He said that the government was unnerved as the yatra is drawing great response from the people.