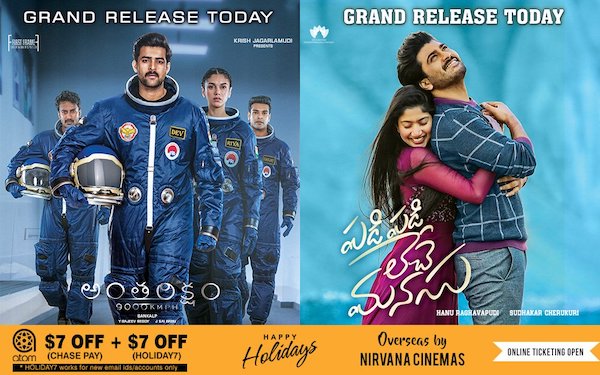 Antariksham, the first ever telugu space film is all set to hit screens on Dec 20 in USA. It’s been making waves on social media for the amazing trailer, which clocked more than 5 Million views just on Youtube alone. Sankalp Reddy, who amazed us with his first outing Ghazi is directing this Space adventure and is all set to take you on an expedition.

Varun Tej, who has been riding high on back to back successes after Fida and Tholiprema is playing an astronaut in this film and Lavanya Tripathi is playing his love interest. Aditi Rao is also playing a crucial role.  First Frame Entertainments, that has produced films like Kanche, Gautamiputra Satakarni is bankrolling this film.

The content and KDM keys are delivered to all theaters and movie premieres will be on time. Online ticketing is now open and you can book your tickets now.

This is a kind of film that needs to be watched on big screen for the technical aspects and VFX effects.

It’s been a while we have seen a pure love story in recent times. Surya(Sharwa) and Vaishali(Sai Pallavi) from Padi Padi Leche Manasu, are going to mesmerize you all from tomorrow. #PPLMTrailer has already garnered 4.2 million views.

The chemistry between Sharwanand and Sai Pallavi is an eye-feast. Hanu Raghavapudi who earlier directed Andala Rakshasi and Krishna gadi veera prema gatha, is bringing this beautiful love story. Murali Sharma, Sunil, Priyadarshi and Vennela Kishore among others playing key roles in the movie.

Vishal Chandrashekar’s soulful music and Krishnakanth’s heartfelt lyrics brought life to the songs. The title track “Padi Padi Leche Manasu” is an instant hit and everyone fell in love with this song and the other melodies from the album created buzz across. One of the best album in recent times.

The picturization and the visuals are very rich and beautiful in video songs and the trailer. The entire film shot in Kolkata and the mountainous beauty of northern India.

Content and KDM keys are delivered to all theaters and showtimes will happen as scheduled. Online ticketing is now open and you can book your tickets now.

You can literally watch both these films for free in AMC, Regal & 8K Cinemas using Chase Pay and HOLIDAY7 promo code in Atom App. For detailed info about this offer, Click Here.