The buzz in the secretariat circles and among the government employees these days is that both the Finance Minister and the principal Secretary finance are not to be seen in their chambers. Not just that, they are not accessible even to the officers and the employees.

Finance Minister Buggana Rajendranath is rarely paying a visit to his chambers these days. There are rumours that principal secretary finance SS Rawat too is rarely seen in the secretariat. Sources say that Buggana is silent these days. According to them, both Buggana and Rawat are said to be unhappy at the domination of an official from the CMO. Sources say that Buggana is upset over the control of the CMO officials over his department.

Sources say that initially, Buggana enjoyed the confidence of the CM, but now, he has to get the nod of a CMO official to get even his bills passed. Reports also said that Jagan had instructed the finance ministry officials that payments should be made only after the CMO official gives his nod. This is said to be at the root of Buggana’s discomfiture.

Interestingly, secretarial employees union leaders Bopparaju and Bandi Srinivasa Rao too indicated that they were unable to meet the minister and the secretary to air their problems. They said because of their inability to meet these two individuals, they were forced to take up the agitational path. 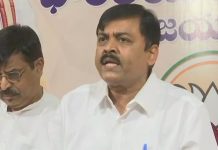