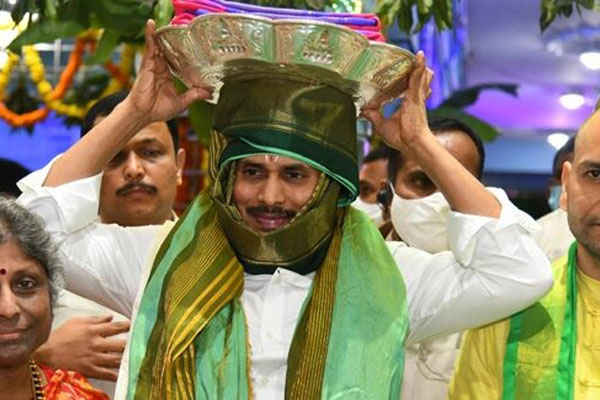 Chief Minister Y S Jagan Mohan Reddy, known for his belligerent attitude and defiant nature, has entered the Tirumala shrine without signing the mandatory declaration form as demanded by the Opposition parties, mainly the BJP and TDP.

Despite protests, the Chief Minister entered the abode of Lord Venkateswara Swamy on Wednesday to present ‘Pattu Vastrams’ on the behalf of the state government. Jagan was seen wearing traditional silk ‘pancha’ and green colour ‘kanduva’ with the namam (insignia) applied to his forehead. After presenting the ‘Pattu Vastrams’ to Lord Venkateswara Swamy, he headed to Vakulamata for ‘darshan’. Later, he will take part in ‘Garuda Seva’.

The Chief Minister offered a set of new silk cloths on the occasion of the ongoing nine day Brahmotsavam festival, that began on September 19. He carried the cloths kept on a silver plate on his head and handed it over to the priests and officials of the Tirumala Tirupati Devasthanams. He offered prayers to the presiding deity of Lord Venkateswara.

Earlier in the day, several BJP and TDP leaders were kept under house arrest as a preemptive measure to thwart any trouble at Tirumala. The BJP and TDP leaders demanded that Jagan Mohan Reddy sign a declaration form. They demanded that the Chief Minister be allowed to enter the Tirumala shrine only after submitting the declaration form. A posse of police personnel was deployed outside the residence of former TDP MLA Sugunamma. Angry TDP leaders protested the police action to keep Sugunamma under house arrest. Further, the TDP leaders demanded that the government follow the age-old tradition laid down during the British regime to declare one’s faith before entering the Tirumala shrine. They wondered why Jagan visits Tirumala shrine by himself, while his entire family accompanies him when he visits Jerusalem.

TTD chairman YV Subba Reddy, who is also Jagan Mohan Reddy’s uncle, stirred a Hornet’s nest by stating that there is no need for the chief minister to sign a declaration to prove his faith in Lord Venkateswara.

While BJP and TDP leaders in Andhra Pradesh have been kept under house arrest as a preemptive measure to thwart any trouble ahead of the CM’s visit to Tirumala, tension prevailed at Jagan Mohan Reddy’s Hyderabad residence ‘Lotus Pond’ as Bajrang Dal activists staged a protest outside his residence.

They raised slogans outside the CM’s residence demanding that the Andhra Pradesh government protect temples in AP. The police arrested several Bajrang Dal activists after they entered into heated arguments with the police. The activists raised slogans minister Kodali Nani. The police beefed up security at the Lotus Pond.

Jagan also met Shekawat prior to meeting Home Minister Amit Shah and discussed the irrigation projects in the state. Rajya Sabha member Vijay Sai Reddy and others accompanied Jagan when he met the Jal Shakti minister.