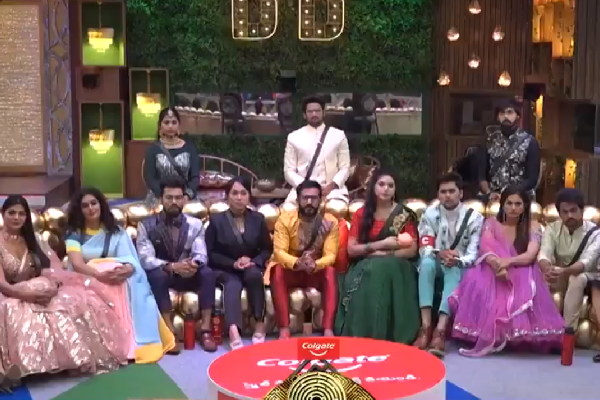 In Big boss house usually weekend episodes are filled with fun and games. But this Saturday episode was very serious and was filled with hot debates and emotions. Details as follows

One thing that made the audience engaged to the Big boss show for entire week is the verbal war between Priya and Lahari during the nominations. Nagarjuna started the episode saying we’ll find answers to the questions that remained unanswered. He started with Lahari vs Priya episode. He asked Lahari to go to power room and then showed the video in which Ravi spoke bad about Lahari and told Priya that she has been moving close to him to get anchor roles after coming out of the house. He also told that Lahari is moving close to him despite the fact that there are single men in the house. This video totally exposed Ravi and made Priya’s position very strong. Lahari understood the facts and lambasted Ravi for his double standards and hugged Priya. She told Nagarju that she doesn’t need help of Ravi to get anchor roles.

Nagarjuna corrected Shanmukh in Siri’s issue. He also corrected Priyanka in her personal matter. He advised her to forget about his ex boyfriend who ditched her. He also reprimanded Manas for naming himself as worst performer

Shut the door on the face:

Bigg boss designed a gave and in this game , housemates have to name one person who is least deserved to be in the house and shut the door on his or her face.

Priya named Lobo for avoiding her. Lobo named Lahari and generated a few laughs by commenting on her dressing style. Lahari named Ravi because of the video she has seen. Ravi named Priya for dragging his name while nominating Lahari. Jessie named Lobo for breaking rules in the house. Siri named Sunny and the gap between them is known to the audience very well. Swetha named Manas while Manas named Anne . Nataraj nominated Kajal while Kajal nominated Lobo for the way he behaved while sharing food. Sriram named Jessie. Shanmukh named Sunny. It looks like Shanmukh is very sensitive.

The way Nagarjuna handled this part shows he is following the show carefully.

Nagarjuna saved Priyanka and Sriram today. Manas, Lahari and Priya are still in danger zone. As per unofficial reports, Lahari is in the bottom of the list. However, she seems to be happy and confident of getting saved as Nagarjuna called her the victim.

We need to wait and see who will leave the house tomorrow.