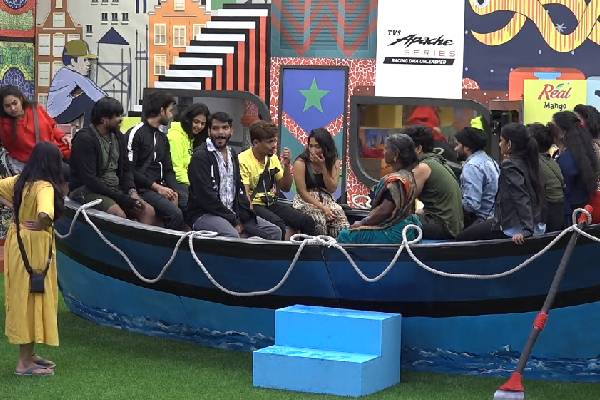 In each season of Big boss, we see some love stories blossoming. Some stories get connected to the audience and some stories irritate them. In the previous season, Rahul-Punarnavi’s story is one of the main reasons for Rahul to continue till the last week though he has some other good qualities. This season, Akhil Sarthak is seen trying to flirt with Monal. At one point he asked Monal to feed him. Abhijeet also is seen getting close to Monal. But as of now, this triangle story is irritating the audience. Monal’s continuous weeping and Akhil’s moody behavior is the reason for this. We need to see how this triangle story will turn in the future.

As a captain, Lasya announced a post of ration manager and allotted it to Amma Rajasekhar. As she is the captain of the house this week, she need not participate in the nominations task.

There is a boat in which all contestants have to enter. The boat will pass through nine ports and one contestant has to get down at each port and whoever gets down will be nominated for this week. At the first port, Abhijeet asked whether Gangavva wanted to get down and nominate herself. She initially denied but got down later. Noel voluntarily got down at the second pot. Monal did the same at 3rd port. As per the housemates, all these three are confident about getting saved through voting.

As Lasya is Captain of the house, she is not in nominations. Out of the remaining 15, a total of 9 nominated for eviction and 6 contestants saved themselves. Mehaboob, Ariyana, Akhil, Devi, Sujatha and Divi saved themselves. It seems all these 6 are not confident of getting saved through voting.

We need to wait and see who will get evicted this week.