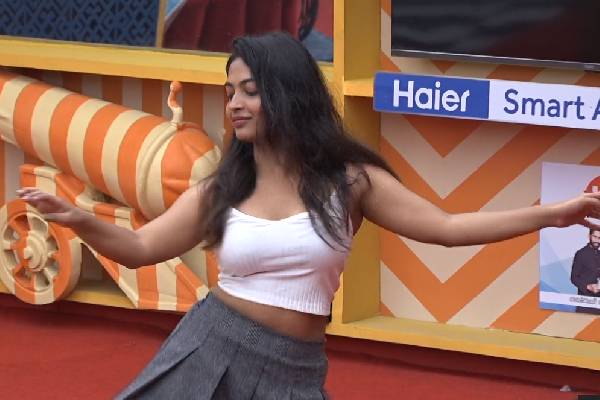 Harika utilized the opportunity only partially:

Harika is known as a talented artist from her youtube shows. Until today, she didn’t get a good chance to showcase her talents in Bigg boss house. Today Bigg boss gave her an opportunity to entertain the house, She danced, sang a song, did a skit and did ramp walk and tried to impress the house. Though the house was impressed, the audience felt she didn’t utilize the opportunity to the fullest, given her talent. One contestant who fully utilized given opportunity in recent times is Divi, who changed her prospects with a single episode in week-1.

Bigg boss gave another task of doing a skit to the housemates. In this skit, Karate Kalyani is a nagging mother in law who harasses her daughter in law. Her daughter is Divi and she keeps rejecting all wedding proposals. Akhil is a young man from America who wants to marry Divi. Abhijeet is Kalyani’s son and Sujatha is his wife. Devi is a servant maid and Sai is an accountant. Akhil mistakes maid as daughter of Kalyani’s daughter and falls for her. Accountant Sai also shows interest in marrying Devi. Later, Akhil tries to impress Divi but she rejects the proposal after seeing Akhil’s views on villages and country people. But finally, Sujatha convinces him to marry Divi and Kalyani realizes about the good nature of her daughter in law.

The skit is ok but Kalyani’s performance in the skit was very good and she proved she can really fit in the roles similar to those of Suryakatham of yesteryears. TV9 Devi as a servant maid also did a very good job. Sujatha, Abijeeth, Divi, Akhil, and Sai are ok. There were also some TV ads enacted by housemates. One ad led by Gangavva and another by Amma Rajasekhar ae just ok.

Prior to these entertainment programs, Harika is seen feeding Abhijeeth. Abhijeet is seen flirting with Monal later. During the conversation, Monal said Abhijeeth that Ariyana likes him a lot. Amma Rajasekhar is emerging as an entertainer. His dance with Kalyani and prank on Mehboob evoked some laughs.

Overall the episode was partially successful in entertaining the audience.