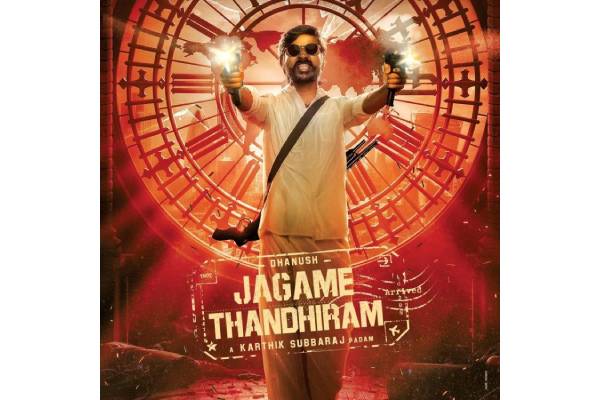 Tamil actor Dhanush who has been on top form with back to back hits tested his luck with Jagame Thandhiram. The film had a direct digital release on Netflix today. Karthik Subbaraj directed this gangster drama and Aishwarya Lekshmi, James Cosmo played other important roles. Y Not Studios in association with Reliance Entertainment produced Jagame Thandhiram. Here is the review of the film:

Jagame Thandhiram starts in Madurai and it narrates the story of Suruli (Dhanush), a local gangster. A famous gangster Peter (James Cosmo) seeks the help of Suruli to assassinate Sivadoss (Joju George). After completing the mission successfully, Suruli joins the big league of gangsters. The rest of Jagame Thandhiram is all about what happens in Suruli’s life and the major challenges he faces in his journey. Watch the film to know about the complete story.

Jagame Thandhiram is an underwhelming drama that starts off with a bang and it relies majorly on the mannerims of Dhanush. Santosh Narayanan’s work stands out tall in this poorly written and half baked gangster drama. Dhanush makes sure that he delivers his best throughout the film. As Suruli, he is the best. The film falls flat after the entire story shifts to the United Kingdom. There is hardly a sequence that the audience would remember after the film gets completed.

The flashback episodes are passable but they could not save the film for sure. Karthik Subbaraj could not utilize Dhanush as the actor can alone take the film to the next level. Jagame Thandhiram has a bunch of renowned actors but they could not save the film because of the poor script. Everything in Jagame Thandhiram looks unnatural as the film happens in the UK. The background score is solid and the cinematography work looks good. The makers spent lavishly on the film. Karthik Subbaraj could not utilize the opportunity well.

Jagame Thandhiram is half baked and unnatural. Except Dhanush’s performance and the background score, the film offers nothing.