Young actor Nithiin and Keerthy Suresh are working for the first time for a romantic entertainer Rang De. Venky Atluri is the director and the film is carrying decent expectations. The lyrical song of Emito Idi from the film is out and it is melodious and romantic. Nithiin and Keerthy Suresh are in extremely romantic mood in the released glimpses. Devi Sri Prasad composes a soothing romantic tune for the situation. Shreemani’s lyrics and the vocals add soul for the song.

Emito Idi is one of the best romantic numbers of Telugu cinema in the recent times. PC Sreeram’s cinematography work stands out in the song. Rang De is currently in final stages of shoot and the entire pending portions would be completed by December. The film produced by Sithara Entertainments will release in January 2021. 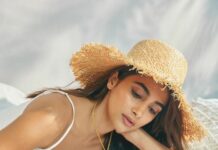