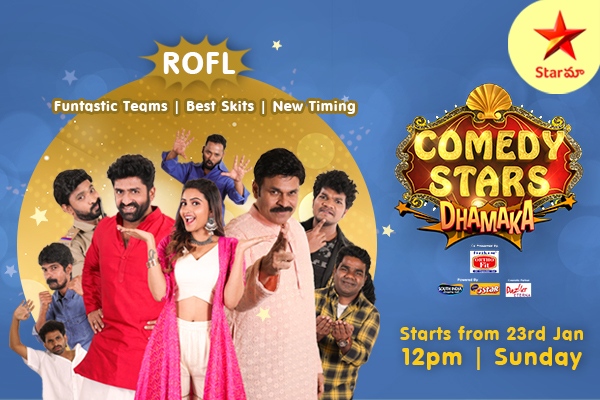 Star Maa had recently levelled up the bar of Comedy with its super funny and super awesome show Comedy Stars. Bringing together the best of comedians of television onto a single stage, Star Maa had surpassed the usual boundaries of innovation and touched the horizons of something new and great.

The show that is being aired every Sunday at 12 PM has made and still making the audience laugh their hearts out while they sit together for the Sunday family lunch.

Comedy stars is a novel show where the star humorists of the show are divided into teams and are made to face each other in a wild and entertaining but healthy competition. So far, the show had motivated the participants to explore ingenious ways of comedy which made it one of the best comedy shows ever to be made in Telugu.

Have you experienced this brand-new world of comedy yet? If not, get ready for another hilarious episode of Comedy Stars on Star Maa this Sunday at 12 PM. It’s Star Maa’s gift for its loving audience.