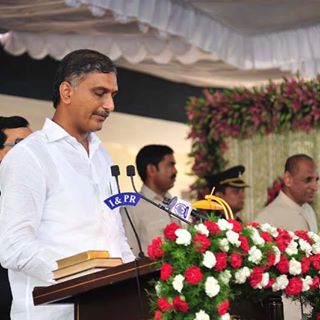 It has not been even two weeks since Andhra and Telangana have retreated from the raging fight on cash-for-vote and telephone tapping.
The two states seem to have struk a deal that it would be better for the ruling partes to be in perpetual state of conflict.

Neck deep in problems arising out of their failure to implement the massive poll agenda given to the people of two states, the TDP and TRS governments appear to be diverting the people’s attention to emotive issues. The ruling parties grill each other and make big noise as if some disaster is going strike them.

They fight in newspapers and news channels. Their cronies carry foward these fights to streets -stage dharnas and burn effigies. And take a break for some time after filing a petion in court.

Today, T irrigaion minister revived the war of words on two letters AP chief minister N Chandrababu Naidu wrote to centre three months back against the two projejects, Palamuru-Ranga Reddy and Dindi.
Now TRS government, which is facing ire of the people for its Osmania Hospital-Demolition move and on the way the free education from KG to PG is being implemented. And Naidu also badly needs distraction from the special status controversy.

This is how T Harish Rao reacted.

Racting to the letter Naidu wrote to Central Water Commssion opposing the taking up of two projects, Telangana irrigation minister the Pattiseem lift irrigation project taken up on Godavari
Assailed Naidu in strongest terms, Harish said AP chief minister Naidu was staging a drama opposing the two porjects only to divert the attention of the people from Special Status issue.

” You can write any number of letters. You can’t stop the Telangana government from taking up these projects crucial to people Hyderabad and other districts of Telangana.” Harish warned.

Questioning TDP government’s argument that no project should be taken up in Telangana without taking AP into confidence, Harish aked, “Does Pattiseema have permission. Tell us how many of your projects have permission?’

He said Naidu was desperate as he failed in his attempt to get special status bestowed on Andhra Pradesh which cuased resentment all across the state among the people.

“People are losing hopes on Naidu,” he said.
Now, to divert the attention for his failure, AP Chief minister was opposing the implementation of Palumuru-Rangareddy and Dindi projects.

Ridiculing the letters of Naidu , the T-irrigation minister said, the letter had neither head nor tail.
“You had opposed Telangana formation. You had written hundreds of letter. What happened ultimately,” Harish asked.
Asking Naidu to refresh his memories, Harish said the Palamuru project was promised when Chandrababu Naidu was chief minister last time.

” Naidu as chief minister admitted that Telangana had 290 tmc of assured water, out of 360 tmc of water available in Krishna River. Kiran kumar Reddy’s government issued a GO initiating the survey of the Palamuru Project for an allocation of 70 TMC. Can you say this is not documented,” Harish asked Naidu.