Switch to: తెలుగు
Home Press Releases HIT is a HIT in the USA; Release by Pride Cinemaa 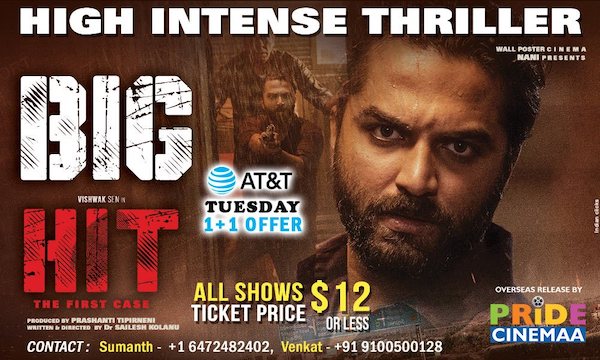 It’s a grand success for the team of Hit! The crime thriller starring actor Vishwak Sen and Ruhani Sharma in the lead has turned out to be a profitable venture for everyone involved.

In fact, Pride Cinemaa, who released the film in the overseas, is quite happy with the response to the flick that is turning out to be a good hit!

Interestingly, by Sunday evening, the film recorded a collection of $230k in the US, and $37k by Monday in Australia. The film has managed to break even in most of the locations of release already and is proving to be a reason for happiness for everyone involved.

Leading distributor of Indian cinema overseas Pride Cinemaa is happy to be associated with a new age film like HIT directed by Sailesh Kolanu.

Produced by actor Nani and stylist Prashanti Tipirneni on Wallposter Cinema, the film offers excitement and novelty, paired with some great performances and engaging storytelling that have become the talking point of everyone who is loving the film.

Book your tickets and watch the film now at your nearest theatres.

For the audience in the US, it’s time to grab the Tuesday 1+1 AT&T offer to see Hit with friends and family.

Don’t miss this engaging movie that will surely be a treat to watch on the big screen!