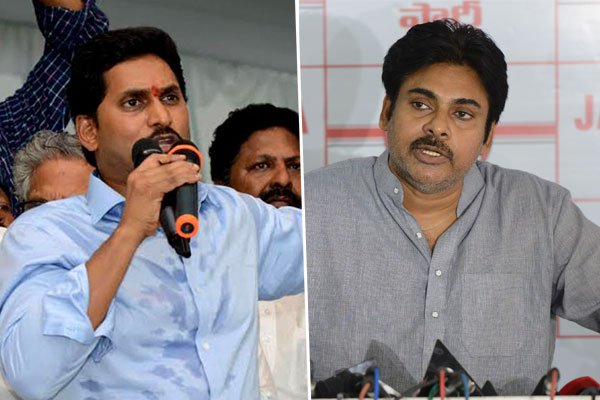 The two can never agree on anything and, therefore, there is no way they can come together, say personality experts.

Jagan has a huge legacy of corruption that is haunting him like a ghost, as almost all rival leaders from TDP to Jana Sena are levelling allegations of accumulation of massive ill-gotten wealth by him (ie Jagan) during the regime of his father YSR in United AP.

On the other hand, Pawan has taken upon himself the self-declared role of a crusader against corruption and irregularities of all sorts ranging from land acquisitions, irrigation projects, liquor and sand mafias and so on and so forth.

No pro-YCP rumours say Jagan has diluted his faction-rich Kadapa superiority complex or mindset to a little extent at the advice of his election consultant and strategist Prashant Kishore for the sake of winning election.

The same sources say Jagan has agreed to believe the words of Prashant who wanted Jagan to shed his overconfidence and get friendly to all other anti-TDP parties so as to take all possible electoral advantages to finally achieve his dream of becoming chief minister in 2019.

Maybe, this is the cause for a little cheer-up and some subdued celebrations within the ranks of YCP camp these days while the ground realities project a totally different picture.

Firstly, there is talk among anti-YCP sections that Prashant Kishore has already met with his first failure as Jagan’s Praja Sankalpa Yatra in AP has not got expected grand success.

There is nothing in Jagan’s yatra that is similar to YSR’s padayatra prior to 2004 when whole villages and farmers and agricultural workers in the fields left their work midway and came voluntarily to meet and greet YSR as he passed by their hamlets.

Prashant’s team has employed all sorts of modern gadgets and drone cameras to pep up Jagan’s yatra these past weeks but to no avail and there was no expected euphoria nor popular attraction.

Now the question is whether Prashant will ever get success in bringing Jagan and Pawan together, which is like joining South Pole and North Pole.

It should not be forgotten that Pawan himself said that he gave his support to TDP-BJP combine in 2014 only to prevent corrupt Jagan from becoming CM as that would further destroy the chances of already ailing and separated AP due to injustice done by then Congress.

Till recently, Pawan has consistently levelled lots of allegations against Jagan saying that the YCP leader got trapped in so many CBI cases because of his illegal assets acquired in his father’s time.

Now, in campaign ahead of 2019 elections, Pawan shifted his gear and began attacking ruling TDP continuously on irregularities in sand mining, liquor mafia, educational institutions and so on and so forth.

Does this mean Pawan is going to go soft on YCP completely in order to hurt TDP? Will Pawan ever agree to make Jagan CM?

During his Praja Porata Yatra now, Pawan has been saying no party will get full majority in 2019 and that no party can form a government without his Jana Sena support.

By saying so, he has not indicated any particular party for his probable future plan to play a king maker role in government formation and his options may be open that any party may offer a post-poll deal.

While things are so uncertain like this, there is no way election strategist Prashant can do any last-minute wonder like bringing poles together before or after elections.

In all likelihood, every party will look for its best bargainable deal based on their strength after election results.

And, then, they walk away with their share of political gains while voters watch the show in awe and disbelief.