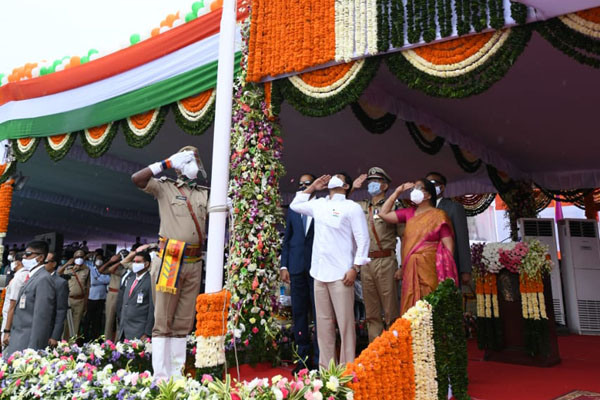 As India celebrated 74th Independence Day on Saturday, Chief Minister Y S Jagan Mohan Reddy used the platform to make his stand firm on the three capitals issue stating that his government will soon lay foundation for trifurcation of Andhra Pradesh with the executive capital in Visakhapatnam, legislative capital in Amaravati and judicial capital in Kurnool.

Addressing the 74th Independence Day at Indira Gandhi Stadium in Vijayawada, Jagan stated that the central government has no role to play in capital creation and that the state government is free to choose its capital.

“The shifting of the capital would commence shortly in a phased manner and the foundation for the three capitals would be laid soon,” Jagan minced no words even as the issue is pending in both the High Court and the Supreme Court. The High Court on Friday directed the state government to maintain status quo till August 27 on shifting of the capital to Vizag from Amaravati. On its part, the Andhra Pradesh government had filed a Special Leave Petition in the Supreme Court seeking a stay on the High Court order to maintain status quo on the capital issue.

The Modi government also filed a counter-affidavit in response to a writ petition in the Andhra Pradesh High Court seeking implementation of Special Category Status to the state, and other provisions of the Andhra Pradesh Reorganisation Act, 2014. The central government had made its stand clear that the capital creation is a state subject and that the Union government has no role to play.

Jagan Mohan Reddy also demanded special category status and said that according to the 15th finance commission, the central government had the discretion to confer the status on the state.

The CM also broached another controversial issue – English medium education in government schools at primary level. Fiercely arguing in favour of English medium in government schools, the Chief Minister raised the bogey of untouchabilitty to strike a chord with the Dalits stating that despite 74 years of Independence the language divide cuts through all of India’s divides — caste, class, urban-rural.

Jagan stated while his government will go ahead with the decision of introducing English medium for Class 1 to 6, attempts were made to put a spanner in the government’s initiative to usher in educational reforms.

The Andhra Pradesh High Court had already set aside the government orders intended to convert school education to English medium, saying that children and parents should be given the choice in the language of learning.

The Modi government had unveiled the New Education Policy makimg mother tongue or regional language as the medium of instruction till Class V in schools, which can be extended till Class VIII.

After hoisting the tricolour flag, the Chief Minister received the guard of honour from the State Police. As part of the Independence Day celebrations, the Andhra Pradesh government presented various tableaus of different departments all in predominantly blue, white and green colors which represents the YSRCP colors.