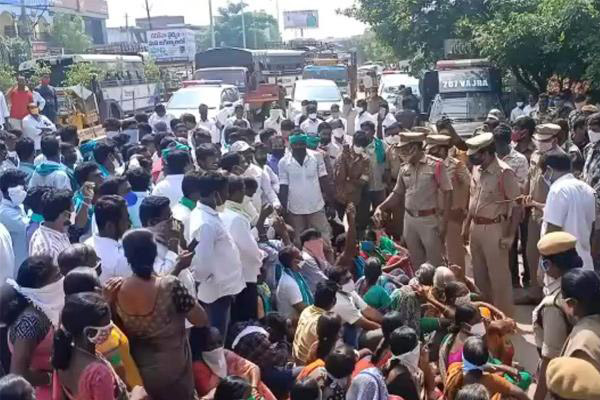 Scores of maize farmers staged a protest outside the district collectorate office while senior Congress leader and former minister and MLC T. Jeevan Reddy was kept under house arrest.

The maize farmers took out a ‘Chalo Collectorate’ rally and gathered outside the district collectorate office. Tension prevailed for some time as a large number of police personnel tried to disperse the agitating farmers. The farmers demanded that the KCR led TRS government set up procurement centres with Rs 1,850 as MSP for the crop. The agitating farmers held placards raising slogans against the State government and tried to barge into the district collectorate office. However, police stopped them and a scuffle broke out between the police and the farmers.

Farmers said they have been growing specific crops like maize and superfine rice as per Chief Minister K Chandrasekhar Rao’s suggestion, but the government has failed to set up procurement centres with Rs 1,850 as MSP for the crop. The farmers said not one procurement centre has been opened. The police have imposed Section 144 in Jagityal.

In the 2019 elections, Kalvakuntla Kavitha, daughter of Chief Minister K Chandrasekhar Rao, lost the Lok Sabha elections from Nizamabad against D Arvind. Hundreds of farmers took to the street demanding a correction in minimum support price (MSP) and the setting up of a turmeric board as was promised by Kavitha. A total of 179 farmers filed their nominations against Kavita in the Lok Sabha elections which led to the defeat of Kavitha in 2019 elections. Kavitha had recently won the MLC elections in Nizamabad.