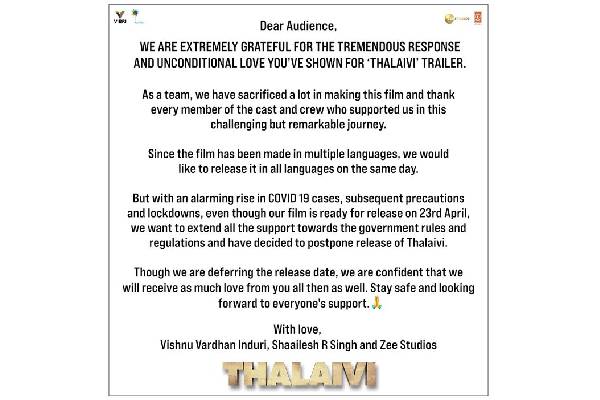 The second wave of coronavirus is having a toll on Bollywood badly. All the summer announcements are now out of the race after Maharashtra, Delhi and other states are badly hit. Akshay Kumar’s upcoming movie Sooryavanshi is officially postponed and Salman Khan is keen to postpone his Eid release Radhe. Kangana Ranaut’s upcoming pan-Indian movie Thalaivi is announced for April 23rd release and the makers announced that the film is now postponed. The makers of the film are keen to release the film in all the languages on the same day. With the situations alarming in the North Indian circuits, the film stands postponed.

The new release date of Thalaivi will be announced soon. Thalaivi is the biopic of Tamil Nadu politician and actress J Jayalalithaa. AL Vijay directed the movie and Vishnu Induri is the producer. The trailer of the film clocked a record number of views and is a smashing hit in all the Indian languages.