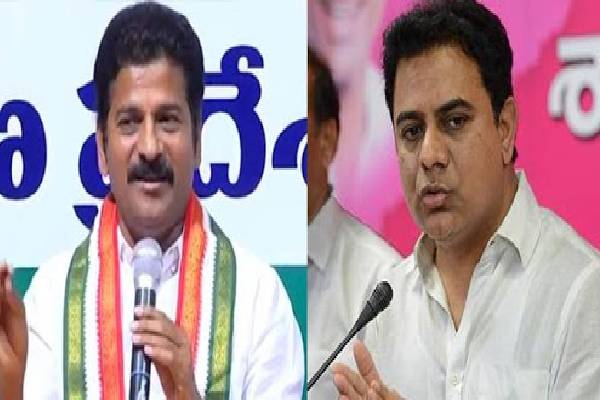 The “Twitter war” between TRS working president, IT minister K.T.Rama Rao and TPCC chief A. Revanth Reddy has been intensifying further day after day.

KTR on Thursday (today) termed Revanth as “3rd rate criminal” and a “thug leading the party” and “PCC cheap” on his Twitter page.

KTR tweeted, “As the chairman of the IT standing committee, Shashi Tharoor Ji had paid some compliments to the efforts of the Govt of Telangana recently His colleague in parliament & PCC Cheap calls him a Donkey!! This is what happens when you have a 3rd rate criminal/thug leading the party.

KTR’s tweet was in response to Revanth calling Congress MP and senior leader a “Donkey’ during his chit chat with media at Gandhi Bhavan on Tuesday.

When media personnel referred to Shashi Tharoor praising KTR and Telangana government for achievements in IT sector when Tharoor visited Hyderabad recently on a study tour of Parliamentary Standing Committee, Revanth said, “Shashi Tharoor is a donkey. He is unaware of what exactly happening in Hyderabad.”

Revanth’s comment was published prominently in media today. KTR posted one of these news clippings on his Twitter page and termed Revanth as 3rd rate criminal.

The Twitter war started between Revanth and KTR three days ago. Revanth called KTR an ‘irresponsible minister’ for tweeting that the accused in six-year old girl’s rape and murder in Singareni colony in Hyderabad was arrested within hours of the incident while the fact remains that he was at large.

An embarrassed KTR immediately corrected his tweet saying he was misinformed and the police are on the hunt to trace him.