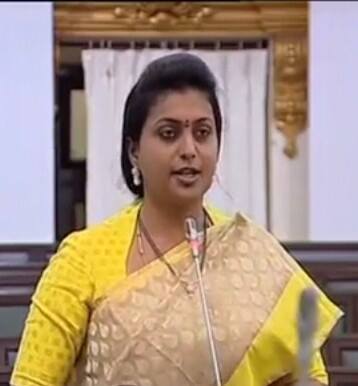 YSR Congress MLA RK Roja said the brouhaha associated with release of master plan of capital Amaravati was only to cover-up the Pushkar tragedy as the Plan has no budgetary support or the mention of Centre’s role and only looks like the promotional brochure.

“The hurried release of Master Plan by airlifting a Singapore Minister is only a diversion Plan and Chandrababu Naidu has been using the publicity machinery to cover up his failures one after the other. To cover-up the cash-for-vote scam, he had planned a grand publicity for Godavari Pushkaram roping in international channels and when it backfired with the tragedy, now he brings in a Singapore Minister by a chartered flight to release a Master Plan of the capital city which is nothing but diversionary tactics,”  Roja told media Tuesday.

The master plan looks like a colorful brochure that realtors release before they sell the flats, and it looks good on paper but where are the budgetary allocations, she asked.

“First Naidu  should make it clear if the Centre has any role to play in the capital formation  and development. The State Reorganisation Act 2014 clearly states that it is the job of the Centre. Why then the Singapore company is roped in it needs to be explained. Singapore is not a charitable institution but a commercial entity and there is no reason as to why it should render free service to Chandrababu Naidu.

Roja also demanded that the Government should also clarify the extent of land  allotted to Singapore company in lieu of the development contract.

“It is more than one year and still there has bee no budget or Centre’s nod . the plan suggests that it takes nearly 35 years for the capital city to be in place  by which time two generations will pass and there is no answer to the farmers’ plight and the jobs and food security,” she added.